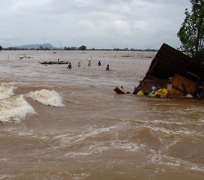 WARRI, October 12, (THEWILL) - At least three persons on Thursday lost their lives courtesy of the devastating flooding that has spread through communities in Isoko, Delta State.

The two women died in a desperate bid to save their cassava farms from being washed away by the flood. They had brazed the flood and attempted an early harvest but were drowned when their canoe went over.

The male farmer reportedly slumped and died when he saw the damage done to his farmland.

Their remains have since been retrieved and buried.

Meanwhile, corpses deposited at the Aluta Memorial Clinic’s Mortuary located in Amawa layout in Oleh, the local council headquarters were yesterday evacuated following the upsurge of flood in that part of the community.

Reports from the area also revealed that flooded homes of residents being sheltered at the various camps set up for Internally Displaced Persons (IDPs) are being looted by burglars with Uzere community and others along the riverine communities recording the highest number of cases.