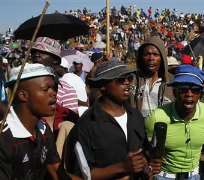 Striking gold miners in South Africa have rejected the industry's latest wage offer, a trade union said on Thursday, dimming hopes that wildcat strikes that have paralyzed the sector could end anytime soon.

Since August, almost 100,000 workers across South Africa - including 75,000 in the mining sector - have downed tools in often illegal and violent strikes that are hitting economic growth and undermining investor confidence in the minerals hub.

"This was a final offer from the companies. They said take it or leave it," Lesiba Seshoka, spokesman for the National Union of Mineworkers said. "Now that it has been rejected our options have been exhausted."

Africa's top two bullion producers, AngloGold Ashanti and Gold Fields, have been hit by an estimated 48,000 miners taking to the streets to fight for higher wages.

The action is costing AngloGold 32,000 ounces of gold each week, while Gold Fields is losing 2,300 ounces a day at the two mines that have been affected.

The companies said they would respond later via the Chamber of Mines, the industry body that has been negotiating on their behalf.

The wildcat strikes, which started in the platinum industry and then spread to other mining companies and beyond, have raised questions about President Jacob Zuma's leadership and tarnished South Africa's reputation among foreign investors.

Africa's biggest economy is home to 80 percent of known reserves of platinum. The price of the precious metal has risen more than 20 percent since police shot 34 miners on August 16, the bloodiest security incident since the end of apartheid in 1994.

DEATH TOLL EXCEEDS 50
The death toll from the labor unrest has risen to more than 50, and the violence continues.

Police said on Thursday that one man had been burnt to death and another was fighting for his life after being shot at the Ikanini informal settlement near an Anglo American Platinum mine in Rustenburg, 120 km (70 miles) northwest of Johannesburg.

"The volatility in the area is a result of the ongoing mine strikes. This is linked to the strike action," Thulani Ngubane, a police spokesman, said. Twenty people had been arrested, he said.

South Africa's production of platinum group metals fell 1.9 percent in August compared to the same month last year, data showed on Thursday, while output of gold, which only began to be hot by strikes in September, rose marginally.

The government estimates that gold and platinum production worth 4.5 billion rand ($517 million) has been lost to the strikes so far, along with 118 million rand in lost coal production.

The mines employ around 500,000 people.
State-run logistics group Transnet's cargo volumes have declined by 3-4 percent in volume terms in the past month, said Siyabonga Gama, head of its freight rail unit.

"If there's no production and stocks are depleted the whole economy suffers," he told Reuters on the sidelines of a consumer goods conference in Johannesburg.

Beyond mining, wage talks with the main union behind a three-week truck driver strike that has hit supplies of fuel, cash and consumer goods, collapsed again this week. Port and rail workers are expected to join their colleagues in a one-day sympathy protest next week.

Government employees also plan to strike from next week.

The South African Petroleum Industry Association said petrol stations were experiencing delays of up to a day in getting fuel and that some had run completely dry.

The rand fell to a 3-1/2 year low against the dollar earlier this week and Moody's cut South Africa's government bond rating last month, citing the government's difficulty in keeping up with spreading unrest. ($1 = 8.7032 South African rand)