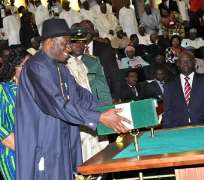 The proposal tagged "Budget of consolidation and inclusive growth" is higher than the 2012 budget of N 4.7 trillion.

A breakdown of the proposed budget showed that Education got the highest figure of N428 billion followed by Defence with N348 billion, and the Police with N319 billion while the health received N279 billion.

The figure represents an increase of about 5 per cent over the N4.7 trillion appropriated for 2012.

In the budget N2.41 trillion was budgeted for recurrent (non-debt) expenditure, while capital expenditure got N1.5 trillion. Statutory Transfers was allocated N380 million while N591 billion went for Debt Service.

The gross federally collectible revenue projection is N10.84 trillion, of which the total revenue available for the Federal Government’s Budget according to the budget is N3.89 trillion.

Fiscal deficit is projected to improve to about 2.17 per cent of GDP compared to 2.85 per cent in 2012. The Estimate for oil production was put at 2.53 million barrels per day with a projected increase.

President Jonathan said that the Subsidy Reinvestment Programme (SURE-P) would continue with the expected resources of N180 billion in 2013.

According to him, supportive fiscal measures for some priority areas would be implemented to promote local agriculture.

He said that the importation of machinery and spare parts for local sugar manufacturing industries would be duty free.

Jonathan said that a 10 per cent import duty and 100 per cent levy would be applied to both brown and polished rice.

Meanwhile, President Jonathan Wednesday declared that in spite of the security challenges bedeviling the nation, the unity of the country was not negotiable.

Jonathan who made the declaration while presenting the 2013 budget proposals before the National Assembly also assured that those who carried out the barbaric killings of students at the Federal Polytechnic, Mubi in Adamawa must be brought to book.

He said because of his administration's resolve to fight insecurity in the country, a chunk of the 2013 budget has been allocated to security.

"We are conscious of the fact that without security, no meaningful development can take place in our land; and our combined efforts at building the nation would only amount to little. This is why we channelled a great deal of resources to security in the 2012 Budget.

"We remain conscious of the impact of security challenges facing the country and are determined to bring the situation under control, I commiserate with all our citizens who lost loved ones in the recent Mubi killings and all the other acts of senseless destruction of lives and properties in the country. We have already made some arrests in the Mubi case, and I want to assure Nigerians that we will not tolerate this wanton destruction,” Jonathan said.