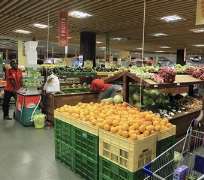 World food prices rose in September and are seen remaining close to levels reached during the 2008 food crisis, the United Nations' food agency said on Thursday, while cutting its forecast for global cereal output.

The worst drought in more than 50 years in the United States sent corn and soybean prices to record highs over the summer, and, coupled with drought in Russia and other Black Sea exporting countries, raised fears of a renewed crisis.

Grains prices have retreated in recent weeks due to rapid harvest progress and concerns about weak demand in a slowing global economy.

But the Food and Agriculture Organisation's (FAO) price index, which measures monthly price changes for a food basket of cereals, oilseeds, dairy, meat and sugar, rose 1.4 percent to an average of 216 points in September after remaining stable at 213 points in August.

"Prices are remaining high... prices are sustained, it's highly unlikely we will see a normalisation of prices anytime soon," FAO senior economist Abdolreza Abbassian told Reuters in a telephone interview.

He added however that it was not clear whether the small increase in September meant prices were now on an upward trend, but he expected volatility in markets could intensify in coming months.

"Manufacturers and producers will naturally want to pass on increased costs to their clients but they will meet with stiff resistance from retailers who are reluctant to increase checkout prices for increasingly value-conscious customers," Singh said.

FAO's index is below a peak of 238 points hit in February 2011, when high food prices helped drive the Arab Spring uprisings in the Middle East and North Africa, but current levels are very close to those seen in 2008 which sparked riots in poor countries.

OCTOBER MEETING
The Rome-based agency said it had cut its 2012 world cereals output forecast by 0.4 percent to 2.286 billion tonnes from a previous estimate of 2.295 billion tonnes, mainly due to a smaller maize crop in central and southeastern parts of Europe, where yields have been hit by prolonged dry conditions.

It also decreased its forecast for world cereal stocks at the end of the 2013 season to 499 million tonnes, down 4 million tonnes from its projection last month.

Despite the rise in food prices, the United States Mission to the UN Agencies in Rome said on Thursday it had agreed with other countries that a meeting of the emergency Rapid Response Forum to discuss food prices under the G20 agriculture body AMIS was not necessary.

Abbassian said a ministerial meeting on the food market situation was still planned for Oct 16.

Aid agency Oxfam called on governments to tackle the root causes of food price volatility at the meeting.

"They need to boost food reserves and strengthen social protection programmes for populations that are at risk of hunger," Oxfam spokesman Colin Roche said in a statement.

"We cannot afford to sleepwalk into the next food crisis."

French President Francois Hollande has launched a global campaign to win support for strategic stocks of agricultural commodities, but EU development Commissioner Andris Piebalgs said this week that was not the best way to tame food prices, advising a focus on agricultural investment to boost production.