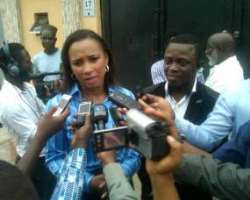 History was made yesterday as ex-beauty queen, Fiberesima Ibinabo was sworn in as the first female president of Actors Guild of Nigeria (AGN). The swearing in ceremony was conducted yesterday at the guild's secretariat in Lagos.

This was after Ibinabo was elected by eligible voters at the keenly contested presidential election held on Thursday, September 27, 2012 which had herself, Emeka Rollas and Steve Eboh as contestants.

The event was attended by Segun Arinze, Steve Eboh, Ejike Asiegbu, Charles Inojie and others.

"The election is now over, all I am now after is to unite everyone in the guild and bring the A-list stars back into the guild," Ibinabo told Nollywoodgists.com on phone when we contacted her.

Watch out for this space tomorrow to get full details of the politics that took place in the last AGN Election, which has two presidents declared winners. It is an interesting piece.