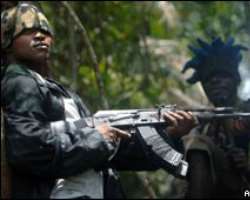 The main rebel group in Nigeria's Niger Delta is to observe a 60-day ceasefire in its attacks on the oil industry.

Mend - the Movement for the Emancipation of the Niger Delta - said the move was in response to the freeing of rebel leader, Henry Okah, on Monday.

Mr Okah was released from jail as part of a government amnesty; he'd been held for more than a year on charges including treason.

In a BBC interview he said he was proud of those who fought for his freedom.

The Mend ceasefire is set to come into effect from Wednesday, a statement said.

On Sunday, just hours before Henry Okah was freed, militants in speedboats attacked the main oil depot serving Lagos - well away from the usual area of operations in the Niger Delta.

Mr Okah said he regarded that attack as a gesture, welcoming him to freedom.

'Real issues'
But he said the Niger Delta needed a kind of peace process.

People there, he said, were fighting so that the government would recognise the poverty and injustice that exists.

Asked if he would favour a partial decommissioning of weapons, he said:

"Yes, yes, I would. But the government must start attending to our problems."

Mend says it is fighting for a fairer distribution of the wealth from Nigeria's natural resources, but in the past the government has dismissed the militants as criminals.

In a bid to end the attacks, the government offered militants an amnesty three weeks ago.

Officials said any rebel willing to give up weapons by October would benefit from a rehabilitation programme, including education and training opportunities.

The government's critics say the amnesty is unlikely to work because the unrest is not a straightforward political struggle.