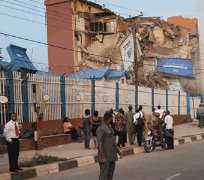 …against the Rubbles of Collapsed and Collapsing Ones

In Nigeria now, incidentally, as we wipe off the dusts of one collapsed building from our faces, we get a fresh collapse, dusting us all over again. Sadly, the incidences of building collapses in the country are recently getting so very disturbing. And it gets the more demoralizing when one considers the fact that in Lagos alone, researches and reports record about 100% building collapses since the year 2000. Happening often in our major cities – Lagos, Abuja, Port Harcourt, Ibadan and others – the collapses all hammer us with twisted tales of losses of invaluable lives and irrecoverable properties which all collapse with the buildings. Yet we slumber, employing no proactive morally awakening feasible measures to prevent future similar mishaps. And one is left with the age-yawning cry of, “Which Way Nigeria?” However, with a spotlight on Lagos State now, this presentation shows cases of building collapse, the causes and possible solutions to the evilly increasing collapses in the country. Some people with mammon-proof skins and feelings may ask why much ado about the collapses? Is Nigeria the only country where buildings collapse? They may argue.

Well, granted, buildings also collapse even in developed worlds. One instance being the collapse, in May this year, of a five-storey building in Harlem, New York. However, let us note that in this case, we have reports of zero loss of human life. Also notable is the fact that the building, which was a 100 years old and counting, was vacant at the time of collapse. Workers had already been deployed to work on it and perhaps get it back to habitable status. And the collapse happened when the workers were all away from the day’s job. Another instance of building collapse from outside Nigeria happened in January this year also. It was in Rio de Janeiro, Brazil, where a 72-year-old, twenty-storey building, collapsed, falling on two of its smaller neighbours to consequent their collapsing too. Seventeen people were reported dead from this but here again, we see a really aged building. This is hardly the case with the collapses we have in Nigeria. Interestingly our aged buildings stand even stronger than the new ones. The collapses here happen to buildings that are still full of life so to say. Sometimes even, we have collapses of buildings which are just freshly completed or still under construction. This is a very sadly sore situation as the end of buildings is to serve a satisfactory lifelong.

Pointedly, “in Architecture as in all other Operative Arts, the end must direct the Operation.” And “the end” here in building, “is to build well.” Henry Wotton pointed this out in his Elements of Architecture. This “well building,” he further observes, “hath three Conditions: Commodity, Firmness, and Delight.” When a building has all these conditions religiously put in precise observance then the stories would only be of our world with less and less of collapses of buildings that have not satisfied a lifelong. Truly, buildings are first and foremost for inhabitation. Not for money amassing. Therefore, preceding and succeeding every building construction should be the spirit that it is for human inhabitation. Interestingly, it is this inhabitation that eventually brings the needed money to a property owner. So in any way one wants to look at it, let the thought of inhabitants be highly favoured above money making or money saving. A building “should not merely be useful and ornamental; it should preach a high moral lesson,” Lytton Strachey rightly points out.

Evidently however, when a building lacks the capacity to preach a high moral lesson, collapsing becomes only a matter of some momentarily vaporing time. This is the case with the collapsed and collapsing buildings in Nigeria. In as much as it will be so easy to throw stones of blames at the economic situation, adding that it is the major cause of the increasing societal corruption and all that come with it, the truth remains that the problem is not much of the economy as it is of morality. The professionals in construction maintain that the major cause of building collapses in Nigeria is the use of substandard materials and pitiably poor applications. Hold the artisan and the artisan accuses the contractor. Hold the contractor and the accusation hammers on the producers of building materials or the client who will not be moral with the payment. Hold the producer or the client and accusation quickly nails on the economy. Keep all out of check’s way and you will have a construction that lacks a hair strand of moral capacity, a building that lacks the solid rock standing, a building that is collapsing with every tick of time.

However, from the archives of the Nigerian Institution of Structural Engineers (NIStructE), in a keynote address by Engr Kunle Adebajo at an opening of a 3-Day National Workshop on Collapse of Buildings and Engineering Structures, we have the following as causes of structural collapses: One, non-adherence to the approval regulations. Two, the non-involvement of a Professional Structural Engineer during construction. Three, the employment of incompetent and low quality workmanship. Four, the use of poor quality materials. Five, lack of soil investigation and improper interpretation of site conditions. Six, lack of professional site supervision. Seven, lack of knowledge of the guiding principles concerning a construction.

Eight, greed and the desire to maximize profit. Nine, excessive rush in construction. Ten, poor or inadequate form and false work. Eleven, corner-cutting by the client or the contractor or I add, the artisans. Twelve, construction by all-comers due to the perception of engineering projects as an easy access window to making quick money. And finally, thirteen is the unethical dealings between project promoters and the relevant Planning Authorities. This list can still accommodate more, if you mind.

In the Vanguard Online of August 21, 2012, Kingsley Adegboye in his “Buildings Collapse: Experts Set to Monitor Construction Sites” reported Mr David Addio Moses, an architect and lecturer in the Department of Architecture, University of Lagos as noting that the lack of enforcement of the Building Code has made efforts to curb building collapse in the country ineffective. The report also has it that Mrs Catherine Kehinde George, the first female town planner in Nigeria, said that developers cut corners. And she gave a somewhat moral “altar call” when she urged professionals “not to compromise in their handling of building projects.” Mrs George also “called on the government to be friendly with the people in terms of charges on approvals of building plans, just as people looking for land for development should seek information at town planning offices.” From the report also, “the immediate past chairman of the Nigerian Institute of Architects (NIA), Lagos State Chapter, Abimbola Ajayi said lack of implementation of building laws is hampering efforts to curb the menace of building collapse in Nigeria. Mr. Bebe Obaye, an engineer, and Head of Enforcement Unit, Standard Organization of Nigeria (SON) said the greatest headache of SON is that people are not ready to comply with the prescribed standards.” So you see why I say that the problem is not much because of the collapsing of our economy or the lack of professionals. Our buildings collapse because our morals are collapsed and need to be properly “erected” before our buildings can stand erect well enough to defy collapses.

Nevertheless, from Engr Kunle Adebajo’s earlier cited address again, we have the following recommendations as ways to prevent the incidences of Building Collapses: One, only Structural Engineers, trained to do Structural Engineering jobs, are the ones who should be entrusted with the responsibility of executing Structural Engineering projects, especially site supervision of construction works. Two, relevant Planning Authorities should not approve structural drawings that do not bear the NIStructE stamp alongside the COREN stamp to indicate that such drawings have been made and or checked by a registered Structural Engineer who is a corporate member of the NIStructE, a division of the NSE. Three, the relevant planning authorities should formally engage the services of practicing Structural Engineering firms to vet designs and drawings. They must also be consulted for project supervision, monitoring and control from inception to completion. Four, the relevant planning authorities must not compromise on the standards established for the approval of drawings.

Five, government must, through the appropriate standard organizations, ensure availability of only good quality materials for the construction market. Cost reducing measures need to be employed to reduce the cost of construction. Six, dealers in poor quality construction materials should be prosecuted. Seven, government must demonstrate adequate interest in project safety by prosecuting, with all seriousness, offenders whose activities result in the collapse of structures. Eight, a proper Geotechnical Soil investigation must be carried out before embarking on any project, for Proper foundation design. Ten, building developers must imbibe the culture of engagement of the services of qualified Structural Engineers on their projects, irrespective of size. Eleven, all building projects must possess the mandatory COREN Project Control Forms (PCF) and all approving authorities must ensure compliance to this.

Consequently, it is way beyond words and the obtainment of moneys and human or paper certifications. We need to morally wake up and honourably arise to raise durable buildings against the rubbles of our collapsed and collapsing ones. We must wake up now and build ourselves to the point where we can substantially manifest excellent spirits or else we would continue to have many buildings fated-to-collapse in advance. We must wake up now and follow Shakespeare’s Lord Bardolph of Henry IV, who preaches that “When we mean to build, we first survey the plot, then draw the model; And when we see the figure of the house, then we must rate the cost of the erection; Which if we find outweighs ability, …we then but draw anew the model in fewer offices, or at least desist to build at all….” We must wake up now indeed and daily raise structures of excellence so as to collapse the rising riotous monuments of mediocrity and immorality that are bedevilling and collapsing our society. Instructively, in his work, The Seven Lamps of Architecture, John Ruskin advises that “When we build let us think that we build for ever.” Literally and literarily, this is the spirit we need now more than any other because it is the highest of time now we awoke and arise to build. So let us daily wake up and arise, determined that no matter what happens, if we must build, then when we build, we build for forever.