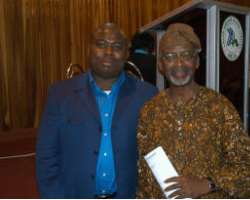 Prominent Yoruba leader and founder of Oodua people's Congress (OPC), Dr Fredrick Fasheun has berated the approach Lagos State government is using to displace the residents and property owners in Ibeju-Lekki and Epe council areas of the state, following the state's orchestrated plans to secure space for its proposed state-owned international airport.

Information available to huhuonline.com revealed that Lagos state government through its Permanent Secretary in the Ministry of Lands, Gbenga Ashafa, invited community leaders and other stakeholders representing the 65 host communities to a meeting at its Alausa office, in order to discuss and fashion out compensation plans. The meeting however was a stalemate as government insisted it can only give out one-off compensations to the people as against the partnership and royalty plans they preferred.

The spokesperson of the property owners Prince Abduraheem Owolabi of Ogungbo community said the issue of land acquisition is beyond compensation, affirming that they don't need government compensation, but they wanted a Memorandum of Understanding (MOU) between the government or better yet, the company that is planning to implement the international airport project on their land.

Prince Owolabi further said the discussion over the location of the airport was beyond the permanent secretary (Gbenga Ashafa), calling on the principal officers of the state government to reschedule a meeting where the modalities and terms of acquisition would be adequately spelt out to the land owners, so that their concerns and agitations can be exhaustively addressed in line with their wishes.

The stakeholders who are mainly traditional chiefs and senior citizens, made Lagos State government to realize that they are not illiterates and that they know what land acquisition is and how it is done under law. They also decried the insincerity of the government as it has failed to declare whether the building of the airport will be through Public Private Partnership, as they are showing interest to be part of the partnership.

Also among the stakeholders, an octogenarian who elected anonymity said Lagos government has in the recent years been known to hijacking people's landed properties in choice areas at the expense of its legal owners, without taking into cognizance the effects of such measures on the people it governs. He said the host communities will do all they could, to ensuring that their objectives are achieved in this present struggle.