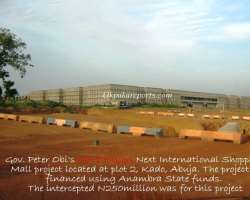 “We did not intersect any money. We don't give a damn what anybody have to say. People can go on to concoct their stories. I have been briefed. We have been told to say this. We have no such case in police. We are not investigating any case”, stated Frank Mba, the Lagos State Police Public Relations Officer to inquiries by agents of Ukpakareports.com regarding the N250million transported from Anambra government lounge in Awka to the business [private] residence of the Governor of Anambra State, Mr. Peter Obi - which the Lagos Police intercepted on Sunday last week. Interestingly, Officer Frank Mba's response adds another contradictory fold to the unfolding 250million scandal – in that - the folks in Anambra Government House have publicly stated that they were intercepted by the Lagos Police.

Be that as it may, our investigators in Lagos have gone behind the veil of secrecy to gather more revealing details to the arrest and seizure of Peter Obi's boys and the N250million. As reported earlier, the arrest had occurred at 3:07pm [Nigerian time] in Lagos and saw the detention of two of Governor Peter Obi's special assistants in the persons of Valentine Obienyem and Benjamin Uba [Managing Director of Peter Obi's ANIDS transportation] along with two mobile police officers [MOPOL]. New information sourced from persons near the DPO in Lagos police Apapa, Officer Mohammed Ari, indicates that following the arrest of Governor Peter Obi's boys, the DPO was immediately alerted of the discovery. And as also reported earlier, Governor Peter Obi arrived roughly two hours after Officer Mohammed Ari was alerted. The DPO who was at the time cautious and unsure of what to make of the discovery, called for the police to physically count the money under the recording eyes of a camcorder. With this, the Lagos police went on to video tape the counting of the N250million. And according to the source, the counted money summed to N250miillion. And at the completion of the count, the DPO and Governor Peter Obi stepped aside to have a brief discussion –of which only Gov. Obi and Officer Mohammed Ari were privy to the content of their private discussion which took place inside the office of Officer Mohammed Ari. Following the discussion which lasted for hours, Governor Obi was promised the release of his two aides, Benjamin Uba and Valentine Obienyem. And when contacted Officer Mohammed Ari, in confirming Governor Peter Obi's visit to the Lagos Police Station told Ukpakareports.com that, “the governor visited the Apapa police station shortly after the incident. But it was just a courtesy visit and nothing more”. The DPO denied having been settled by the Governor to bury the case. This is as our investigators learnt through one of the principal officers inside the Lagos police that the Police “closed” the investigation by returning the N250million to the Anambra State government. The money was returned via a bank deposit into a Fidelity Bank account belonging to the Anambra State government - and bank teller [receipt of deposit or deposit slip] of the deposit was kept in the custody of the Lagos Police.

Following the deposit by the Lagos State police, Governor Peter Obi's attempt at covering up what appears in the public domain as money laundering, shifted gears to Abuja and Anambra. Our investigators authoritatively learnt that Governor Peter Obi in the company of some of his aides visited the Inspector General of Police, Mike Okiro in the afternoon of Monday – the day after the arrest.

In Awka, on June 5, 2009, Gov. Peter Obi's operatives were at work trying to seal the leakages in the cover up. Two of Peter Obi's operative Ejike Onwusogbulu [the 'contractor' fall guy who was not present in Lagos at the time of the arrest] and Benjamin Uba [one of the arrested operatives] were sighted at Fidelity Bank located along Nnamdi Azikiwe Avenue near St. Paul's [Anglican] college, Awka on June 5th 2006. The duo had arrived at the Bank in an Anambra State Government House owned Green 406 Peugeot with license plate number ANGH 246. Ejike was dressed in a white caftan while Benjamin Uba was dressed in a white trouser and shirt. Both men upon entering the Bank, looking apprehensive, rushed upstairs out of sight of our investigators. Their visit to the Bank lasted 1hour 54minutes. Though, it is uncertain the details of the discussion between the duo and the Bank manager, informants within the Bank indicate that discussions regarding how to handle the N250million deposited into the account by the Lagos police - took place between the Bank manager and the two Peter Obi operatives.

To political opponents and former colleagues of Peter Obi, the veil of deception has failed him. In their take, the veil has lost its deceptive cover over what many informed observers believed to be an ongoing practice of money laundering by the Governor of Anambra State - particularly amidst the unraveling whirlwind of troubles now descending mercilessly on the Governor on Anambra State. In the words of one of Governor Peter Obi's principal supporters [a former lawmaker and a fellow confraternity member], in revealing the Peter Obi mode of operation stated, “the N250million leaves Anambra for Next International limited office at 7b Aerodrome road, Apapa, Lagos without failing every last Sunday of the month – where from Monday, Malams are called to either exchange it to dollars or pounds or are given addresses and account numbers of numerous small banks in London owned by Indians, Pakistanis and Lebanese where the monies are held without trace. Heard he wants to be the first Igbo man named in Forbes like Otedola and Dangote which will put him in good position when the Presidency rotates to the South. With our money! When the primary school system has collapsed, water borne diseases rampart and workers on strike?”

This notion is espoused in other quarters of Anambra particularly within the key players of the Obi's administration. In the words of one of the security officers stationed at the Anambra Government House who shared their insiders knowledge into what went wrong on that Sunday, stated, “Mr. Ndibe Obi who usually escorts the money was indisposed. Peter was therefore forced to use inexperienced Mr. Val Obienyem who was unfortunate to run the errand when the hungry and deprived security escorts - whom Peter overworks – and is too mean to give enough to shut up – have had enough and decided to sing.” The government house security officer continued to reveal that Governor Peter Obi pays each of the MOPOL officers a minimum of about N2,000 for each of the normal movement of money and a maximum of N10,000 for the occasional heavy movement of Anambra money. The officer went on to confirm to Ukpakareports.com that it was indeed one of the MOPOL officers who blow the whistle on Peter Obi.

The Governor's latest woes are coming on the heels of other related and/or tangential problems of governance. As Ukpakareports.com reported earlier, the Local Government Area [LGA] funds had during the Peter Obi's 3.5years at the realm of affairs lost N68bilion to withdrawals for payment of questionable contracts and/or items. One of such questionable withdrawals came November 2008 in the amount of N442.5million that was distributed to the 177 town in Anambra State against the Christmas season. Each town was given N2.5million – with N1million of it going to the Traditional Ruler of each town while N1.5million went to the President of each Town Union. What is not clear is why the N442.5million came out of the LGA account. It is against this background that the image maker of the Anambra State House of Assembly in the person of Hon. Egwuatu indicated to one of our reporters that the Anambra lawmakers recently passed a law setting up a joint committee to oversee the usage of the LGA account. He noted this while adding that the 1999 constitution provides for a joint account to be set up for State and local government funds. However, it is unclear why the Anambra lawmakers decided to passed it into law now.

Allegations of financial crimes and relatedallegations of foul play are abound in the Anambra State political ruling class of the many questionable transactions by the Obi administration. One of such allegations which Ukpakareports.com investigators have verified and confirmed as valid is Peter Obi's use of funds received from the Federal Government for use for environmental matters. This fund which is different from the Erosion Fund and LGA Funds is siphoned under the banner of “Common Services”. N700million out of the N1billion grant from the Federal Government in 2005 by the Obasanjo administration for use in palliative work to be carried out at Umuchiana Gully Erosion site in Ekwulobia was siphoned away and remains unaccounted for till today. Umuchiana site contract documents show that only N300million was released to the contractor for the project. Reacting, one of Peter Obi's Pirates Confraternity members and an ardent supporter added in his own words “What are these common services? Where are they rendered in your own LGA?”

Adding gravitas to the money laundering stench is the impeachment overtones gradually sipping into the consciousness of the Anambra polity long after it had been forgotten. The State House of Assembly, the day after the N250million was intercepted, set up an adhoc committee to investigate the source and destination of the said money. And before the adhoc committee could get to work, rumors of bribery by the Obi administration through one of his man-Friday commissioners in the person Hon. Dubem Obaze, began to spread. While Ukpakareports.com cannot confirm whether it was Dubem Obaze that attempted to deliver the bribe, it is however certain that Governor Peter Obi, through emissaries, approached the State Assembly with N50million bribe to incapacitate them from commencing his impeachment. And as gathered, the lawmakers rejected the cash saying it is small.


Meanwhile the Peter Obi boys have stepped up their media relations campaign to a new pitch. This is amidst the epileptic contradictory outbursts by Peter Obi media assistants that continue to sink Governor Peter Obi into a hole. Valentine Obienyem, the special assistant on media matters, on the morning after his release, frantically released a statement to the media indicating that the money found in their possession belonged to a contractor who had requested for the N250million to be paid in cash. Hours after the Valentine's statement hit the newsstands; Valentine released another statement contradictory to the first. This time Val said that the money was not paid in cash that the money was paid in check to the contractor who then cashed the check and hitchhiked with the Anambra government convoy headed to Lagos. To this end, Peter Obi dished out N20million to the editors guild to avert the inevitable explosion from the ill advised cocktail of fabrications to cover a pending inquiry into Peter Obi's money laundering scandal.

Nonetheless, the inner circle of the Peter Obi administration is said to be highly upset with Valentine Obienyem and are currently considering reprimanding him, this is according to sources close to Hon. Emeka Ojukwu Jr.