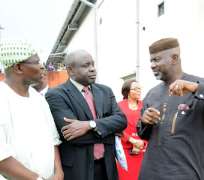 CALABAR, August 15, (THEWILL) - The World Bank has described the youth empowerment programme of the Cross River State Government as a model that should be adopted in other states in the country.

The two-day meeting with the theme, Growing the Tourism and Agriculture Economy Through Youths and Women Empowerment, was organised by the World Bank in collaboration with the Cross River State Government.

Okumadewa, who is also the task team leader of YESSO, disclosed that it is the state’s performance in youth empowerment programmes that has attracted tremendous partnership from World Bank.

He said the partnership is beneficial to the duo because the result of the programme has shown that the state government is committed to it, explaining that the programme is imperative because youth unemployment in Nigeria is about 40 per cent while infant mortality rate is equally high, adding that it is important to support states that come out with initiative to address such challenges.

“The introduction of skills acquisition programmes by the state would go a long way in tackling unemployment especially among university graduates as well as reduce crime rate,” he said.

“The World Bank will support intervention programmes initiated by the state because they are apt and focused. Although 18 states have shown interest in the programme, others can be eligible and begin to learn from one another.”

In his remarks, Governor Liyel Imoke said though Cross River State is in the Niger Delta, it is not as rich as others in the region, and as such, it should design an economic programme that relies on creativity and innovation.

“There is the need to understand the concept of development, especially as it concerns youth and service delivery. Skills acquisition and the numerous intervention programmes introduced by the state will help grow and sustain the economy,” he said, adding that “there is need to study and understand how the private sector operates because it is the key driver of the economy.”

Imoke disclosed that the decision of his administration to build a polytechnic is hinged on the merit of building an institution which will focus 90 per cent on job creation as well as make its graduates employable.

To the governor, YESSO is a project that will provide a framework to tackle unemployment in Cross River State.

Commissioner for Youths and Sports Development, Mr. Patrick Ugbe, in a welcome address, said the meeting was occasioned by the rising level of youth unemployment.

Ugbe maintained that “youths have energy, talents and are creative; and if they are not productive, they are a loss to the nation, so the partnership with World Bank is coming at the right time.”