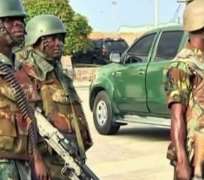 KANO, August 11, (THEWILL) – A Saturday raid by the Joint Task Force (JTF) of the Military and the State Security Service (SSS) on hideouts of suspected members of the Boko Haram Islamist sect in Kano has yielded the arrest of three men, and recovery of 33 highly placed improvised explosive devices (IEDS) and 739 rounds of ammunitions.

According to intelligence information available to the team, the suspects were to employ the seized weapons in unleashing series of attacks on the ancient city during the coming Eid-El-Fitri celebrations.

Mr. Bassey Ettang, the state’s director of the SSS who spoke to journalists, said the operation was done at about 6am on Saturday, based on intelligent reports on the activities of terrorists, known to operate on the outskirts of the northern state. Asides the primed explosive devices, military uniforms were also recovered.

“The intelligence report has it that the materials and the ordinances were to be used on the innocent Kano People during next week’s Sallah celebrations,” he said. “God-willing, they have failed. We arrested three of the terrorists, and they are now under serious interrogations. We also recovered some banners with Arabic inscriptions used for propaganda by the terrorists.”

“The three men were apprehended live in the place — Gadar Bayero near Tamburawa 10 kilometers on the outskirts Kano — which is believed to be a farm for chickens and other animals. From all indications, the gunmen have fled Kano because it is no longer tenable for them to operate within the city. That’s why they relocated to the outskirts of the city.”

He urged residents of the city to live their lives normally without any fear, exuding enthusiasm that the heavy security checkpoints in and around the state would deter the sect from launching any attack.