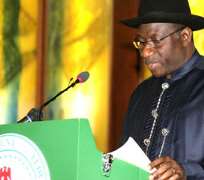 ABUJA, July 26, (THEWILL) – Nigeria's president, Goodluck Jonathan has called for the dispensation of adequate attention to women and girl-child issues, as this is crucial to achieving sustainable peace and development on the continent.

Jonathan made this observation on Thursday at the opening of the 7th African First Ladies Peace Mission in Abuja. He urged African governments to show interest in issues concerning women and children, especially the girl-child, whom he described as victims of the unfolding security breaches in many countries.

“They are not only subjected to dehumanizing conditions, they are often times the targets of abuse, resulting in the violation of international conventions on the rights of women and girls, to which African countries are parties,” he lamented.

“The countries of Africa must intensify efforts to remove all barriers that limit women and the girl-child from actualising their dreams. Our women must be protected against all forms of discrimination and be given equal opportunities and access to education, politics and the economy.”

Jonathan argued that gender equality is the panacea to stagnation on the continent, urging that premium must be given to political and career empowerment of women.

His words: “I believe that the most sustainable way to support womanhood and guarantee peace is through empowerment. In this respect, our transformation agenda as a nation goes beyond the 30 to 35 per cent of political offices being demanded by women, but creating various opportunities for women empowerment.

“In my cabinet of 42 Ministers, 13 are women. The coordinating minister of the economy, who also doubles as the finance minister, is a woman. For the first time in our country, a woman occupies the position of minister of petroleum resources.”

“Also for the first time, we have admitted women into our prestigious Nigerian Defence Academy to prepare women as full combatants in the Army, Navy and Airforce. Eight days ago, precisely on 16th July 2012, I appointed the first female Chief Justice in Nigeria. Our permanent representative in the United Nations is a woman, so also is our Commissioner in the African Union and the Nigerian Commissioner in the ECOWAS Commission.”

He expressed optimism such appointments would motivate women to inspire the younger generation, and promised that his administration would remain resolute in the implementation of its policy on effective representation of women in all aspects of government.

Commenting on the theme of the summit, The Africa Woman: A voice for Peace, which he described as pertinent to overcoming contemporary challenges in Africa, Jonathan advised the First Ladies to invoke their roles as wives, mothers and leaders to promote peace and security on the continent.