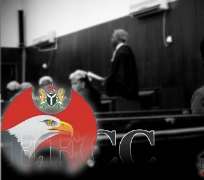 Count two of the six-count charge against her reads, “That you Nneka Nwilene ‘f’ on or about the 22nd day of February 2010, while you were a staff of Bank PHB Plc, Trans Amadi, Port Harcourt, (now Keystone Bank) within the jurisdiction of the Federal High Court, did steal the sum of N35,000,000 by fraudulently transferring same from a Platinum Bank account number 0572100177 with the Bank to a Platinum Bank account number 005305000008 in favour of Daba Williams, and thereby committed an offence contrary to Section 383(1) and punishable under Section 390(9) of the Criminal Code Act Cap. C38, Laws of the Federation of Nigeria, 2004.”

Mrs. Nwilene pleaded not guilty to all the counts, prompting the prosecuting counsel, A. Olatunji to urge the court to remand the accused in prison custody pending trial. But the defence counsel, M Onakpoya, made an oral bail application, insisting that the offence, which his client is alleged to have committed, is bailable.

But Justice Onyetenu, in her ruling, ordered the defence counsel to file a formal bail application and serve same to the court before 24th July 2012, being the next adjourned date.

The arrest of Nwilene followed a complaint by Mrs. Victoria Ekezie, a customer with Bank PHB, who requested for her account statements only to discover that the N35, 000,000 in her fixed deposit account had been liquidated in favour of one Mrs. Daba Williams, without her authorisation.

Further investigations into the activities of Nwilene revealed that she had been pilfering from customers’ accounts successfully and unchecked, due to her elevated position at the bank.

Several other discoveries were made, which prompted Mr. Aminu Ibrahim, an assistant manager in the Corporate Audit Division of Bank PHB to petition the EFCC on the various unauthorized transactions carried out in customers’ accounts by Mrs. Nwilene, which amounted up to N77,810,020.91. Investigations also showed that she remitted part of her loot into one Chelsea Amber Nigeria Company Limited account, a company it was discovered she owns.