PEACE IN A WORLD OF MASSACRE 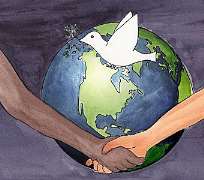 What Jesus calls us to when we're most frightened? When it was evening on that day, the first day of the week, and the doors of the house where the disciples had met were locked for fear of the Jews, Jesus came and stood among them and said, "Peace be with you." After he said this, he showed them his hands and his side. Then the disciples rejoiced when they saw the Lord. Jesus said to them again, "Peace be with you. As the Father has sent me, so I send you." John 20:19-21. Hiding is an inescapable part of the human condition, and it started early: “And they heard the sound of the Lord God walking in the garden in the cool of the day, and the man and his wife hid themselves from the presence of the Lord God among the trees of the garden”(Gen. 3:8).

In last Sunday's lectionary reading from the Gospels, we see a similar pattern. The disciples hide in a house behind locked doors, because they are afraid of the authorities who had just murdered their master. After Monday's horrific massacre in Virginia, most of us will want to go and do likewise. We'll want to hide from God, from others, and from ourselves. The massacre disturbs us not because it's unusual but because it reminds us of the many slaughters inflicted on innocents’ everyday across the globe. It is a frightening icon of our vulnerability and mortality. We are right to be afraid. The enlightened, scientific, rational ethos that pervades our culture hypnotizes us into believing that with every biomedical breakthrough and fresh psychological insight we are progressing as a species. That's a lie. Psychologists work mightily to shape relationships and convince us we really are "safe." But we're not safe. It's as simple as that. We're vulnerable. And we know it. And so we hide.

The man and woman hid themselves "among the trees in the garden." That pristine garden. A perfect garden. That spot "among the trees" must have been beautiful. The disciples hid themselves in a house. They did not escape into the wilderness, but entered a home, a beautiful place of security, family, and love. Some of us dash to an ugly place to escape our fears - into drinking or drugs or sexual addictions. Anything to dull the pain, to escape thinking about the things that frightens us. But most of us choose to hide in a beautiful place. I have a friend who hides in busyness, productivity, and accomplishments. While at work, he rarely lifts his head from his desk - he's in e-mail and phone conversations all day. At home, he's mowing the lawn, sweeping the porch, repainting the bedroom, or doing the dishes. Accomplishments are beautiful things. A resume full of great deeds done is something to be admired. My friend gets a lot of deserved praise for his productivity.

But he admitted to me one day that he bustled about because when he stopped and tried to enjoy his garden in the cool of the day, he started hearing things - thoughts about his troubled marriage, his wayward kids, and his own mortality. He dashed back into productivity as quickly as possible. Some hide in organization because they fear chaos. Some hide in spontaneity because they abhor the accountability that organization demands. Some hide in frugalness because they're frightened of poverty. Some hide in vitamins and exercise and a low trans-fat diet because they believe they can forestall their mortality, or at least Alzheimer's. After this week, we'll want to hide. Some will hide in safety. This is a beautiful thing, something we rightly desire. We use helmets and seatbelts and stand in long lines to throw ourselves in front of metal detectors because we want to be safe. Maybe in the coming months, we'll come up with "more effective means of keeping our schools safe." No inconvenience, no humiliation will seem too great if it means safety at the other end.

Some will hide in the public's welfare. We'll debate whether there are too many guns out there, or not enough. We'll argue about how much freedom we should give up in the name of security. And we'll preach mightily what is best for the nation. Others will hide in righteous anger at the failure of authorities to warn students. We'll demand accountability until someone's head rolls. But wherever we choose to hide, we'll all be hiding from the same thing: our vulnerability, our mortality, the suddenness with which life can be snatched from us or our loved ones. Safety and public policy and righteous anger - these are good and necessary things. But they can also turn into places to hide, where we crouch in the dark, trembling and alone. If hiding is an escapable part of the human condition, longing to be found is a universal human desire.

As children, we relish the game of hide and seek in part, I suspect, because it is rehearsal for the game we play in life. Most of us want to be hiders; we love to find secure places where the seeker can never discover us. Some of us are really good hiders, and it takes a long time to be found. After a while, we get restless and lonely, and we yearn to hear the magical phrase, "Olly, olly, oxen free!" - The invitation to come out of hiding and to rejoin our friends. When Jesus appears to his hiding disciples and says, "Peace be with you," he is saying, "Olly, olly, oxen free! You don't have to hide anymore. You don't have to be stuck in isolation and loneliness and fear." Then he shows them the wounds in his hands and his side, as if to say, "I understand your fear. I've been there. I've sweated blood in prayer. I've hung on a cross. I know what it's like to die."

This seems to me to be a word to Christians, who add to the many hiding places our culture offers an especially religious one. Sometimes we use faith to mask our deepest fears, to fool ourselves and our brothers and sisters into believing that, really, we are confident and bold in the face of death. This next Sunday we may smile and lift our hands in praise, never daring to suggest that we, too, have been shaken by the massacre of innocents. Rather than scold us for shallow and fickle faith, Jesus comes to us today as he came to his disciples. But today he comes to us in his body, the church. He reveals himself again and again in the bread and wine, in his body and blood - the wounds in his hands and side: "I understand your fear. I know what it's like to feel vulnerable and exposed and to stare into death's face. You're not alone."

And at various points in worship, he offers us his peace, from the simple greeting we give one another - "Peace be with you" - to the benediction: "May the Lord bless you and keep you; may the Lord make his face to shine upon you; may the Lord lift of his countenance upon you and give you peace." In this community, he encourages us to admit our fears, to confess our sins to one another (James 5:16), to come out of hiding and rejoin our friends in the fellowship of suffering. "You don't have to hide alone anymore. Olly, olly, oxen free!" It would be wonderful to end here - such a note of hope and comfort! But Jesus does not stop here. Instead he blesses the disciples again - "Peace be with you" - as if he's about to tell them something really frightening. "As the Father has sent me, so I send you." Jesus was sent by the Father into Jerusalem, into Judea, into the very arena where authorities came to despise and finally kill him. And he tells the disciples that the very thing that frightens them and has compelled them to hide - well, that's the place he is sending them. If hiding from fear is the universal human condition, then stepping out into the place of fear is at the heart of Christ's call on us.

That's what Jesus does to the disciples. The disciples want to hunker down behind closed doors, but Jesus grabs them by their discipleship uniforms and shoves them outside to face bullets and artillery and maybe even death. We often wonder how we are to discern the will of Jesus for our lives, wishing he would write his will in the sky or whisper it into our ears. All the while, he is shouting to us through our deepest fears - "As the Father sent me, so I send you!" - sending us into the very situation from which he are hiding. In the coming weeks, parents will be more anxious than ever about the safety of their children. Students will wonder if they'll ever feel safe again. And all of us will feel vulnerable and exposed to the sudden and arbitrary nature of death. These are the very places Jesus calls us to go into. The place may be a physical place, like a school campus. Or it may be an interior place, where one is called to face one's mortality as never before. But wherever the arena is, that's likely where we are called to venture next.

Make no mistake: There is no promise of safety in Jesus' call. As he calls us into the frightening arena, he points to the wounds in his hands and side, as if to remind us that we are afraid for good reason. It really is a dangerous world. It really does wound us. Eventually, it kills us. But while he does not promise us safety, Jesus does give us his peace. "Peace be with you." This is not the peace of pleasant feelings, of course, but the peace that comes from knowing we are in God's purpose and presence no matter what bullets may fly around us. The hymn "They Cast Their Nets in Galilee" describes the simple life enjoyed by John and Peter before they met Jesus "before they ever knew the peace of God that filled their hearts brimful, and broke them too." Though John died homeless in Patmos, and Peter was crucified upside down, the hymn concludes, “The peace of God, it is no peace, but strife closed in the sod, Yet let us pray for but one thing - the marvelous peace of God.”

The world continues to groan as it awaits its redemption; wailing is heard from one end of the earth to the other. How much more blood must be spilled before the one who was mistaken as a gardener on Easter morning replants the new garden? God only knows. In the meantime, we can know the paradoxical peace Jesus provides, a peace that gives us courage to face the very things that frighten us - until the day we find ourselves in a garden once again, this time with no reason to hide. Have question you may call: 08033399821. Stay blessed.