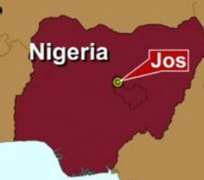 SAN FRANCISCO, July 17, (THEWILL) – Fresh from a multi-weapon assault that gulped more than 100 lives, the troubled city of Jos, in northeastern Plateau State again made national headlines on Tuesday when at least five people were killed in two separate attacks in Bukuru and Sabon-Gida Kanap, both in Jos South Local Government Area.

A seven-year old boy was the victim of the attack at Kerana in Bukuru, near Islamiyya School.

Narrating the incident, Mr. Gyang Moses, an eye witness, said an explosive was thrown from a red Opel Vectra car driving past Bukuru expressway. Its landing was accompanied by sporadic gunshots, one of which hit and killed the seven-year old boy.

But another witness said the boy was killed by a rocket-propelled gun fired from Kerana into the school. He added that members of the Muslim-dominated community quickly reacted with gunshots, leading to the firing of several random gun shots in the area.

Treasurer of the school, Alhaji Usman Danlami said pupils were in class preparing for examination at about 10:30 am when gunshots suddenly rent the air. “The school must have been the target but the bullets hit the wall of a house close to the school, which lead to the death of a minor,” he confirmed.

But secretary of the Muslim Elders Committee in Bukuru, Mallam Bala Baba Mohammed said the deceased was Rufai Umar, a nine-year old boy. He said the incident resulted to skirmishes around the area, and that two other adults, Yusuf and Waje, were found dead a few minutes later — one from bullet wounds, and the other wounds sustained from a sharp object.

“Gunmen drove to the school in the morning, parked their car, and fired RMG rocket-propelled grenade towards the school and, in the process, killed a seven years old boy. After the incident, tension enveloped Jos and Bukuru metropolis, as angry youths blocked roads in a reprisal.”

He added that no arrest had been made but that the STF had cordoned the area and that normalcy had since returned.

Public Relations Officer (PPRO) of the Police in the state, Emmanuel Abuh said the bomb damaged the brain of the boy-victim.

Meanwhile, four other people were killed also on Tuesday, very early in the morning, by unknown gunmen at Sabon Gida kanap, near Bukuru. An eye witness said the attackers invaded a house at about 3am and killed a widow and her three children.