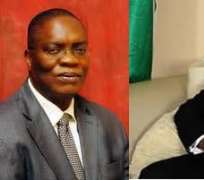 The true position of the case between Engr. Okon v. Chief Akpabio & Ors is still a matter of guess work, 23 good hours after the predicted dooms day had come and gone.

The Hon. Judge had one of those rare yet dreaded opportunities to write his name either in Gold or Mud forever depending on the side of the divide one would have been viewing his Judgment from.

I am compelled to believe that the Hon. Justice is a very angry man as we speak, and may not recover from that feat for a while to come. Let's reason with His Lordship; we are but mere on-lookers but I assure you the density of the perceived tension that enveloped the state yesterday could have been sliced with a kitchen knife if one attempted to. Everybody had his ears on everything and anything that could provide any relevant information from Abuja. Airtel, MTN, Etisalat and others had a field day as calls flew in a forever unending chain.

Now, the star man of the day was nowhere to be found. Loads of buses had departed for Abuja the previous day with the hope to BE THERE LIVE! We are yet to find out where the Hon. Judge was?

I do not know the man in person, but is it possible he was attending a valedictory function in Uyo? For those of us who are not aware, the former Chief Justice of the Federation, was being received at the Uyo Sports Stadium, the same 12/07/2012 at about the same time Justice Kafarati would have been reeling out his final Judgment on the case.

Now let's picture the scenario, the CJN is having one of the greatest moments of his life, all of a sudden, the Chief Executive and all the executive members activate the quick eject button, the state becomes chaotic as opposing interest clash. Suddenly, the Government house where he was lodged, is no longer accessible as mean looking security officers take over and cordoned off the area. The very old man will be stranded, he may suffer a stroke and the rest can better be imagined.

On the other hand, if Justice Kafarati, based on the evidence before him had ruled in favor of the Chief, the insinuations and innuendos that would have trailed the reception is equally better imagined. Either ways, it would have been a very bad call to go ahead with the Judgment.

I have imagined that the CJN had put a call through to Kafarati to say - son, I am not interested in whatever decission you have reached on the case before you, but I ask you for only one thing, let it not be on my day. He could not turn a deaf ear to a last wish of a retiring grand father.

Kafarati is angry and he has every right to be. The whole pressure has shifted from the expectant victor and vanquished to the innocent umpire, as he watched helplessly the day roll away. Recall that there were speculations that the Court, which traditionally sits by 9am or so soon thereafter, will be siting from 1pm? and Furthermore that Judgment which is usually the 1st Item on the list will be the last. They may have been mere speculations but were all pointers to the fact that they were observing proceedings in Uyo Sport Stadium.

The other question will now be, the date of judgment and the reception which was the first in time? I honestly do not know.

As I stated earlier, Kafarati may have been in Uyo yesterday to honour his boss, he may have also been out of the country, only time will tell. I urge us to keep our fingers cross not our hearts crossed. My lord may have just saved the day.