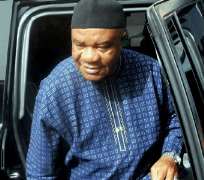 ABUJA, July 11, (THEWILL) – Hearing in a N170m suit involving erstwhile national chairman of the Peoples Democratic Party (PDP), Chief Vincent Ogbulafor, and three others was on Wednesday adjourned to 23rd October by an Abuja High Court.

The Independent Corrupt Practices and Other Related Offences Commission (ICPC), which filed the suit against Ogbulafor, is equally prosecuting Jude Nwokolo, Henry Ikoh and Emeka Emmanuel on a 16-count charge of alleged involvement in frauds totaling N170m.

According to ICPC, Ogulafor, during his term as minister of state for special duties in 2001, floated three fake companies with active connivance of other accused persons. The companies — Henrichiko Nigeria Limited, DHL Consultants and Chekwas Industries — were allegedly employed to embezzle N82.6m, N11.5m and N6.2m respectively.

Ogbulafor, as head of the National Economic Intelligence Committee that was inaugurated to verify debts to local contractors, allegedly endorsed several forged documents as genuine. These forged documents were said to have then been used to certify that the three companies successfully executed jobs worth N104 million.

He is also being accused of receiving inducements of N2m from Chuks Ebiulah and another N28m from Chris Nwoke, both businessmen.

The trial had initially been adjourned indefinitely. But 16 months later, on 30th May 2012, Justice Ishaq Bello granted permission to the ICPC to appear on 11th July and 12th July to continue the trial.