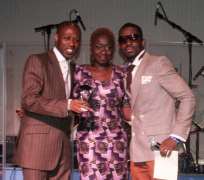 On Saturday 7th July 2012, SHOGGY TOSH picked up 2 prestigious gongs; one for himself as the BEST TV PRESENTER & the other on behalf of SIMPLY CHRYSOLITE as the BEST BAND | CHOIR | GROUP AT THE 2012 AFRICA GOSPEL AWARDS.

The awards kicked off at 5pm with red carpet interviews and Shoggy Tosh told live viewers & re- porters that he hoped to go home with 2 awards, TV Presenter of the year for himself & the Best Band | Choir | Group of the year - Simply Chrysolite. Shoggy won his category beating fellow nominees - Congolese Benita White (UK based), Praise Asemota, Sido Kasanda & Pastor Peter 'Praisetek' Oyebobola making it 8 international awards in 2 years.

Simply Chrysolite who were off to Kingston for Jamaica's 50th National Independence celebrations was represented by Shoggy Tosh on the night and won the Best Band | Choir | Group of the year. They were the only African group invited for the Gospel Festival 2012 also featuring Kirk Franklin, Goody Goody, Carlene Davis, Papa San, Junior Tucker, Evangelist Andrew Palau & many more.

Simply Chrysolite is made up of six young ladies from KwaZulu-Natal aged between 20 - 25 years: Pretty, Thab'zo, Mabongi, Dolce, Thabiso and Phumzile. Four of the ladies are from Umlazi, South West of Durban while the other two are from Lamontville and Pietermaritzburg. They are all men- tored by Rev Tim Omotoso, the Senior Pastor of Jesus Dominion International and were nur- tured by Tim Omotoso Global Outreach.