Glencore Battles To Save Its Bid For Xstrata 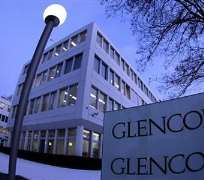 Commodities trader Glencore (GLEN.L) battled to save its coveted $26 billion bid for miner Xstrata (XTA.L) on Wednesday after key shareholder Qatar stunned the pair with a late demand for better terms.

The Qatari intervention pushed the deal to the brink as it prompted a string of shareholders to revisit their own particular concerns, such as soaring executive pay and fears that the combined entity would take on riskier business.

Qatar, which had remained silent for months as it built the second-largest stake in Xstrata, said in a statement late on Tuesday that it supported the principle of the deal but wanted 3.25 new Glencore shares for every Xstrata share, up from the 2.8 on offer.

The 11th-hour call will make it almost impossible for the deal to go through on current terms, several sources close to the deal said, leaving just two days for Glencore to sweeten the offer or delay shareholder meetings scheduled for mid-July.

The very public move also emboldened other wavering investors, particularly those angry over the hefty packages being offered to retain top executives at Xstrata, including an extra 29 million pounds over three years just to keep Chief Executive Mick Davis.

"The intervention by Qatar was unexpected but highly welcome and will certainly bolster the resolve of current holdouts," Simon Wong, partner at corporate governance watchdog and shareholder advisory firm, Governance for Owners.

In the first sign of movement, Glencore said it was considering proposals put forward by the board of Xstrata to change certain aspects of the management incentive arrangements.

Several sources familiar with the situation said the proposed changes included tying the retention packages to performance and shifting the plans from cash to equity. One source added that the tie to performance would specifically involve linking pay to cost cuts through the new group.

Paul Lee, director of Hermes Equity Ownership Services, which is voting on behalf of around 1 percent of Xstrata's investors, said a simple bump-up in the ratio would not be enough to persuade them to back the deal.

"Xstrata to our mind has a pretty good record in risk management. That is less true of Glencore. Lots of investors are most troubled by the ratio and the retention packages, but they haven't really focused on this issue. The immediate question over price is pretty irrelevant in that context. (But) on the pay side, perhaps the board will have to assess where they are when they truly understand the depth of investor feeling. They have misjudged this quite significantly."

Analysts and other Xstrata shareholders warned that Glencore could simply refuse to budge on the larger issue of the deal structure, putting the bid at risk and delaying any subsequent effort for at least six and perhaps as long as 12 months.

"Whether Glencore now wishes to raise its offer, having faced down independent shareholders for the last four months, is questionable," said Neil Dwane of CIO Allianz Global Investors Europe, another top 35 Xstrata investor.

"The Qatar ratio would be circa 10 percent dilutive to Glencore. In fact, given the coordinated global economic slowdown, an argument could be made for actually lowering the price to reflect worsening prospects for miners."

The Thomson Reuters-Jefferies CRB index .CRB, a barometer for commodities, has fallen by about 14 percent since early February, when Xstrata and Glencore announced the deal.

CHARM OFFENSIVE
The statement triggered intense negotiations and an emergency charm offensive from Glencore executives trying to understand the Gulf state's motivations and bring them back onside.

Meetings between Qatar and Glencore were taking place in London and Doha, people familiar with the situation said.

The structure of the offer gives minority investors substantial power - opposition from just over 16.5 percent of the total shareholding could sink the deal, given approval is required from 75 percent for the main vote on the offer, and Glencore does not vote.

The vote on pay requires a simple majority, but both will need to go through for the deal to succeed.

Glencore, already Xstrata's largest shareholder, with almost 34 percent, had been expected to improve the terms of its all-share deal in the early days after it was announced, but it stuck to its guns, as Xstrata faced falling thermal coal prices and increased uncertainty over Argentina and Peru - key to its growth prospects.

MOVING TARGET
On Tuesday, before Qatar's unexpected announcement, Xstrata shares were trading around a 2.6 ratio, implying the market was not expecting a change to terms. Shares in both firms moved wildly on Wednesday, with Glencore down 2 percent at 0845 EDT and Xstrata down 0.2 percent in a rising FTSE 100 .FTSE.

Analysts doubted that Glencore would raise its bid as high as 3.25, the high end of initial expectations and a level at which some say the deal could destroy value for Glencore.

"We believe a bump - probably from 2.8 to 3.0 Glencore shares per Xstrata share - may be necessary to win over (Qatar) and other Xstrata shareholders," Jefferies analysts said. "However, we do not believe Glencore will bump to a ratio of 3.25 times."

Analysts said failure to secure the deal would not only cause a short-term drop in Xstrata shares, currently trading at a premium to the sector, but would also prove damaging for Glencore, whose bosses have long traded on their reputation as dealmakers.

It could also prove damaging for Qatar, which has invested more than $4 billion to become Xstrata's largest minority shareholder.

Several sources close to the deal said on Tuesday that Qatar's demand for 3.25 was likely a negotiating position.

"In our view, the news about Qatar requesting a bump and the recent strong shareholder opposition to the Xstrata management retention awards are problems. But ... these are likely not insurmountable hurdles to the proposed Glencore Xstrata merger," Jefferies said.

"We continue to expect this proposed merger to happen."

Richard Marwood, a portfolio manager at AXA Investment Managers, a top 40 Xstrata investor, said the external pressure from Qatar would give Glencore an opportunity to revise the terms "without too much loss of face".

A collapse of the deal would also be a blow to a long list of bankers involved in the deal, including Citigroup, Morgan Stanley, JP Morgan and Deutsche Bank.

Glencore and Xstrata have until Thursday to alter the terms of the deal without having to change the dates of shareholder votes, set for mid July.

Glencore and Xstrata have declined to comment on the Qatari announcement.