USD 50B for Sustainable Energy for All Initiative 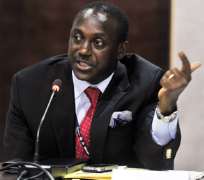 Over five years of hard work and since the Sustainable Energy for All initiative's official launch in New York in 2011, Mr. Yumkella has globe trotted the world meeting with world leaders and their governments, international and civil societies as well as well as heads of multilateral development banks on behalf of his boss, Mr. Ban Ki-moon, advocating for support of Mr. Ban's initiative on behalf of the world's poorest.

His efforts around the world have helped generated more than USD 50B in support of the SE4All interrelated and complementary goals of ensuring universal access to modern energy services, doubling the global rate of improvement in energy efficiency and increasing the share of renewable energy in the global energy mix by 2030.

Valerie Volcovici reports from Rio de Janeiro in the story below:

By Valerie Volcovici
RIO DE JANEIRO, June 21 (Reuters) - U.N. Secretary General Ban Ki-moon said on Thursday that more than 50 governments have launched new energy strategies, while private investors have pledged more than $50 billion to help carry out his goal to double the share of global renewable energy and the rate of energy efficiency improvement by 2030.

The U.N. chief unveiled these commitments to his "Sustainable Energy For All" initiative at the Rio+20 U.N. development conference in Brazil, the first public pledges made to the program since its launch in September 2011.

"This initiative is already mobilizing significant action from all sectors of society. Working together, we can provide solutions that drive economic growth, expand equity and reduce the risks of climate change," Ban said.

The initiative aims to transform the world's energy systems to ensure universal access to modern energy services by 2030 and is one of the key outcomes Ban has been keen to highlight before the conclusion of the Rio summit.

At a press conference on Thursday, Kandeh Yumkella, Director-General of the U.N. Industrial Development Organization and co-chair of Ban's high-level working group on the project, said the initiative was a way to ensure that 1.3 billion people will gain access to clean energy and to ensure that sustainable development stays on the agenda even after the Rio talks close.

Yumkella highlighted a few commitments that have so far been pledged.

The United States pledged $2 billion in grants, loans and loan guarantees, as well as public-private energy technology to support the initiative.

The government of Barbados will increase the amount of renewable energy it uses to 29 percent of its electricity consumption by 2030.

A number of companies also submitted plans to the initiative to either reduce their own carbon footprints, change the way they produce energy or invest in clean energy projects.

The commitments from the private sector totaled over $50 billion, according to the U.N.

French utility company GDF Suez, for example, said it will invest in 50 local energy projects in developing countries by 2020 and boost its own installed capacity in renewable energy by 50 percent from 2009-2015.

Italian utility Eni said it has earmarked $5 billion to reduce its carbon intensity and spend $32 million in the Democratic Republic of Congo to capture gas from oil flaring.

Software giant Microsoft submitted its plan to become carbon neutral and implement an internal carbon fee across its business operations in over 100 countries.

Analysts at HSBC said in a report Thursday that while government negotiators at the Rio+20 summit are "haggling over a dwindling pool of traditional aid," the private sector is focused on the need to scale up "trillions of investment dollars" per year for clean and accessible energy.

"The Sustainable Energy for All initiative is an example of a new way of working for the U.N.: using its convening power to identify critical bottlenecks to renewables, efficiency and universal access to energy, and then designing focused packages of policy incentives, public finance and private capital," the bank said in a research note.

The analysts added that the initiative will require annual investment in the energy sector to rise from the current level of $1.3 trillion to $1.8 trillion.