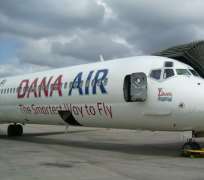 A former Bar Association President, Chief Olisa Agbakoba (SAN) and Mr. Femi Falana will seek to get families of the bereaved more money as compensation for the loss of their dear ones.

Addressing the media in Lagos on Monday, Agbakoba said the team has forwarded a petition to the owners of Dana Airlines, holding them liable for the crash.

"We have sent a letter to Dana Airlines holding them liable for what has happened because according to the law Dana should immediately after 30 days of the accident pay $30, 000 without proof of liability.

“However, if it is established that there was criminal negligence on the part of the airline, families can sue for more damages," he added.

The lawyer further said the suit would set the standards for settlement of claims in the Nigerian aviation sector and also make airlines more accountable.

The aviation Ministry and investigators are still digging into what forced Dana flight 0992 out of the Lagos skyline, killing all passengers and crew on board.