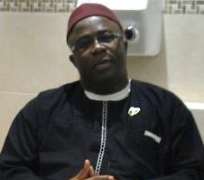 The All Progressives Grand Alliance in the United Kingdom has lamented on the poor governance by PDP led government and the bad state of infrastructures in Abia State. It is believed that democracy leads to freedom, peace and prosperity. This is not the case in Abia State where Gov T. A Orji and his son Chinedu have turned democracy to dictatorship.

APGA's political strategy for the South East zone completely reflects our identity and we advice the masses not to be used as a platform in 2015 to encourage the on going bad leadership. In view of the governance situation in Abia State it is a clear indication that PDP led government has failed the state. Democracy is all about change and its powers of change lies with the citizens.

What happened recently in France last general election is a clear evidence of true democratic change. Losing confidence in any government can be corrected through the ballot box and APGA UK Chapter is urging all voters to make that change possible in Abia State by voting The All Progressives Grand Alliance (APGA).

The APGA UK Chapter is encouraging the youths to play more active roles in politics. Our great party is very strong in the South East zone and we will continue to grow bigger. Voting is a very useful tool in constructing a proper government and once it is manipulated it leads to disaster. A good leader understands the need for wealth redistribution because the policy is an attack to the rich and a subsidy to the poor.

Our members in the United Kingdom have condemned the locking of APGA office in Umuahia and asked if we are truly practicing democracy or autocracy. Abia State political system has broken down completely and the way Abia State is run means that the government does not listen to the voice of the people. We will continue to advocate for good governance in Nigeria because APGA is the only political party which has always been committed to fixing our broken society.

Speaking through the groups special adviser Mr Bana Obioha he expressed the need for people to join and vote APGA in the next general Election. He said that our great party APGA will take power from the State/Federal and give it to the people. APGA UK Chapter in consultation with the National Working Committee will roll out the road map for capturing South East zone.

APGA UK Chapter commends Gov Rochas Okorocha for floating a group that will unite Ndigbo and wants to remind the 21 members of the committee to be patriotic in discharging their duties. We advice the leaders of the Committee to reach out to the youths and involve them in the rediscovery mission. Ndigbo will only get to the promised land the moment we start getting youths involved because they are the future power brokers of any promising economy.

The disciplinary Committee Chairman of APGA UK Chapter Mazi Don Chiekezi (Ezennaya) told reporters in London that APGA will offer real help to millions of families in Abia State if we take over power in 2015. He described the suffering of Abians as very unfortunate and urge the youths to be more active in the development of the state.

We have been campaigning for youths involvement in any Committee both Federal, State and local levels. Exclusion of the youths in high profile Committees is dangerous in Nation building and we are watching the events with keen interests.

All APGA Chapters in Diaspora have condemned the recent bombing of churches by Boko Haram and urge the Federal government to do more in protecting the lives of the citizens. Our condolences goes the families of the deceased and destitute.