Monalisa Chinda Steps Out With New Lover After Crashed Marriage With Dejo Richards? 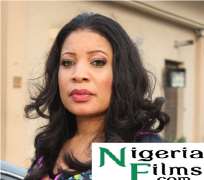 Nollywood actress and Glo Ambassador, Monalisa Chinda may have finally decided to give love a second chance following a highly controversial divorce of ex-hubby and former boss of Questionmark, Mr Segun Dejo Richards.

Barely a year and six months after Richards tied the knot with his US-based lover, Olayemi Omolade Olayinka, the actress was recently spotted with a guy at the Auto Lounge Nite Club, Victoria Island at the birthday bash of fellow actress, Susan Peters. This caused some to insinuate that Mona, as she is fondly called, may have given a second thought to love.

Looking ravishingly beautiful, the actress who was in company of her friend, Emem Isong, was said to be fiddling with her Blackberry and smiling heartily.

While the gig lasted, Mona and the unidentified young man were seen laughing heartily. It has been almost three years since her marriage to Dejo crashed, and some feel it would just be nice if the young man is available to illuminate the actress' heart again.