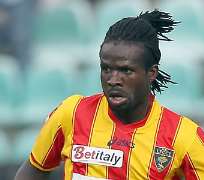 SAN FRANCISCO, June 11, (THEWILL) – Contrary to widespread reports that kidnapped former Super Eagles midfielder was rescued by the Police, indications have emerged that the Police never rescued the Udinese midfielder, as his family paid the kidnappers a ransom of €150,000 (about N30,479,515m) to secure his release on Sunday.

Spokesman of the Delta State Police, Mr. Charles Muka had said on Sunday that policemen freed Obodo and arrested many of his suspected kidnappers; but he declined to reveal the lead that helped their arrest.

Currently on loan to Lecce, which was relegated to Serie B at the end of the 2011-2012 season, Obodo was kidnapped by unknown gunmen in Effurun, Delta State on Saturday morning just as he arrived church.

Bruno Carpeggiani, his agent, told Sky Sport Italia on Sunday that the family paid the €150,000 ransom to secure his release. The midfielder’s girlfriend confirmed the news by phone, saying “free, in good condition and sitting next to me in the car. We paid a ransom.”

In August 2011, father of Chelsea midfielder, John Obi Mikel was kidnapped in the volatile Middle Belt city of Jos, his abductors demanding a “chicken change” of $4 billion ransom. Mikel’s father was later supposedly rescued in the northern city of Kano, where the kidnappers had shipped him to, without word on whether or not the ransom was paid. But the latest revelation from Italy will possible extinguish any doubts that the Obi family paid a ransom.