Apple Expected To Unveil Applications To Take On Google 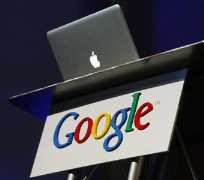 When Apple Inc kicks off its annual conference for software developers on Monday, all the power players in the Apple universe will be on hand, save the one that is in many ways driving the agenda: Google Inc.

More than ever, the consumer electronics juggernaut finds itself in a pitched battle with the online search giant - in smartphones, cloud computing and the never-ending competition for the hearts and minds of the best software developers.

Apple on Monday is expected to announce its own mapping application, challenging the position of Google Maps as one of the most-valued features on the iPhone. It will unveil closer integration of its iPhone apps and iCloud storage service with all its devices, the latest riposte in its battle with Google's Android smartphone software.

It may promote the latest in Siri, the voice interface that the company thinks can continue to set the iPhone and the iPad apart from the Android pack.

And there will likely be a new line of Macintosh laptops too - underscoring the leverage that a full line of hardware products can bring to what is mainly a software war with Google.

"It's all about loyalty and basically leveraging the opportunity of selling more to them," she said. "I don't think the consumers in the mass market are necessarily tied into the Android ecosystem in the same way that consumers on the Apple side are."

Battling in many arenas, the rivals employ different weapons. Apple's vise-like grip on its ecosystem - with the closely managed app store and its seamless integration with the hardware - stands in sharp contrast to Google's free-for-all approach.

The open system approach, reminiscent of Microsoft Corp's hugely successful strategy of creating standard-setting software that runs on a variety of hardware, has allowed Android to capture the market lead in smartphones (albeit with nothing close to Apple's profit margins).

Apple's expected move to replace Google Maps with its own mapping application is a particularly dramatic example of how the rivalry between the companies has been evolving.

Google has invested huge sums in its mapping technology over the years, and about half of its map traffic now comes from iPhones and iPads. Among other things, the traffic from those devices reveals valuable location data that helps improve the mapping service and provides features like real-time traffic reports.

"As Apple builds out its Siri service, they build out the iCloud infrastructure and more capability into its operating system, location data is going to become important," said Sterne Agee analyst Shaw Wu.

"This could help their advertising business too."
MULTI-PRONGED BATTLE
In what was seen as a pre-emptive move against Apple's upcoming maps service, Google on Wednesday showed off its own mapping capabilities, including soon-to-be-launched 3D features.

While Google executives avoided any comment on the possibility of being ousted as a default service on Apple devices, one executive said the integration with Google's search engine provides a mapping service that is far more useful than a product that simply uses a "geocoder.

Apple began to use its own geocoder - technology that uses geographic coordinates to create a digital map - for the Google-based maps on its smartphones late last year, a move that was seen as a precursor to Apple using its own map software.

Another software upgrade that fans and developers are hoping for is Siri, a popular voice-enabled personal assistant service that Google has yet to match.

The service could come out of its beta testing phase and show up on the iPad when Apple unveils iOS6 or the next version of its mobile operating software.

Siri, which has been plagued with connectivity and other issues, is still in beta test version.

Apple's global war on Google and Android in the courts is one sign of how seriously it is taking the potential threat. The consumer device giant is seeing limited success, though, in courtrooms for various patent infringement cases it has against Android manufacturers.

Apple said this week it is mulling a legal order to stop the U.S. launch of Samsung Galaxy S III phone later this month. Samsung is one of the biggest Android phone manufacturers.

In another of the many lawsuits worldwide pitting Apple against Motorola Mobility, now owned by Google, a federal judge canceled a scheduled trial as neither could prove damages. That decision particularly hurts Apple because the iPhone maker was seeking an injunction barring the sale of Android products, said Brian Love, a professor at Stanford Law School.

"The Android side is likely thrilled to simply have the case go away," Love said.

Apple declined to comment on the case.
MACBOOK REDESIGN IN THE WORKS
Where Apple has the upper hand is in its hardware - groundbreaking in design, vastly popular with consumers for its ease of use.

The redesigned MacBook laptops to hit the stage next week are expected to include high-definition screens and Intel Corp's Ivy Bridge cutting-edge processors. Some even expect the iPad's "retina" display to show up on the MacBook line.

This would be Apple's first big redesign of the MacBook Pro since mid-2009. With the new lineup, it hopes to fend off budding competition from rival manufacturers who are pushing a spate of new, thinner laptops called "Ultrabooks."

Already, about 20 touch-enabled ultrabook designs with various styles of foldable, detachable or sliding keyboards running the new Windows 8 system are in the pipeline.

The MacBook line generated 13 percent, or about $5 billion, of Apple's fiscal second-quarter revenue. Unit sales of the aging lineup were up 7 percent from the previous year but were down 23 percent sequentially.

Whatever the case, Apple fans and partners can look forward to a fairly action-packed week.

"Apple is very serious about getting far in front of Windows 8 and Ultrabooks," said Barclays analyst Ben Reitzes. But "software and services will be the focus, with major enhancements to Maps, iCloud and Siri, which developers and users can take advantage of."