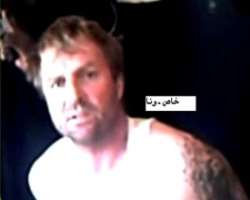 A top security source has told Daily Trust that a German, Raufach Edgar, who was kidnapped in Kano on January 26 this year was killed by his captors this morning before he could be rescued by men of the JTF.

The JTF had conducted a raid at Danbare area opposite the new campus of Bayero University Kano this morning after tracing the kidnapped German to the hideout where he was being held but the captors killed him before the JTF could apprehend them.

The raid is still ongoing and sporadic shootings are still being heard by residents who are all trapped within their homes and unable to go to work. A military helicopter is also still hovering overhead, providing aerial support to the forces on the ground.

The JTF is to brief the press soon on the incident.

Raufach Edgar was until his kidnap working with Dantata and Sawoe construction company. He was abducted  by two gun men around 8 am on January 26 along the Zaria – Kano expressway were his company is located.

Al-Qaeda in the Islamic Maghreb connection
On March 27, a Mauritanian and four other men were arrested in Kano over the January kidnapping. Four of the suspects were arrested in a raid on a supermarket owned by the Mauritanian, while the fifth was held in a separate raid.

'Guns and a laptop were recovered in the store and the documents found in the computer, including an AQIM operation manual, showed that the suspects are linked to AQIM (Al-Qaeda in the Islamic Maghreb) and were involved in the kidnap of the German engineer in January,' one of the sources said in describing the supermarket raid.

AQIM has also disclosed through a private news agency in Mauritania a week before the raid that it was holding the German and that it wanted to swap him for a jailed Muslim woman.

A video obtained by the agency, ANI, showed Raupach, his hands tied behind his back, surrounded by masked gunmen. In the video he called on his “parents, friends and German public opinion” to convince Berlin to “bring an end to the torture of our Muslim sister”, adding that only her liberation will save his life.

AQIM warned that any attempt to rescue Raupach will lead to his death, as happened in the case of Italian engineer Franco Lamolinara and British colleague Chris McManus, killed earlier this month during a failed rescue bid by Nigerian forces.

A source, speaking of the Mauritanian, said 'he turned the upper floor of his store into a hideout where he housed his three Nigerian accomplices.'

Germany responds
A release said to be authorised by the German Embassy in Abuja and published as an advert in Daily Trust on May 11, 2012 claimed the German woman in question, had been released.

The woman, Filiz Gelowicz, who had converted to Islam and now bears the name Uma Saifullah Al-Ansariya, was released two weeks ago, according to the advert.

The publication announcing the release of the jailed German woman said, '100 days missing. Your sister Uma Saifullah Al-Ansariya (Filiz Gelowicz) is free since two weeks. When do you release our brother Edgar?? His friends are waiting for him…'

Edgar's photo was placed by the side of the text of the advert, which also contained a message in Arabic apparently meant to inform the kidnappers of the release of Gelowicz.