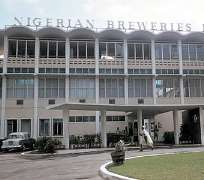 SAN FRANCISCO, May 26, (THEWILL) - Arrest warrants have been issued for the arrest of some top executives of top brewer, Nigerian Breweries Plc. for their alleged involvement in fraud and stealing.

An Akwa Ibom State High Court, sitting in Uyo, the state capital and presided over by Justice Andrew E. Okon, on May 15, 2012, issued the warrants for their arrest in a criminal case of conspiracy to defraud, stealing and forgery leveled against them on January 04, 2011, by the Attorney General of Akwa Ibom State, represented by private prosecutor, Mr. Festus Keyamo.

According to documents seen by THEWILL, some of those ordered arrested have since left Nigeria.

He has therefore written to the Inspector General of Police, Mr. M.D. Abubakar to enforce their arrest.

“We urge you to use your good offices to cause the arrest of the above mentioned persons by using both the Local and the Interpol department of the Nigeria Police Force to fish them out from whatever place or Country they are currently hiding and bring them to justice.”