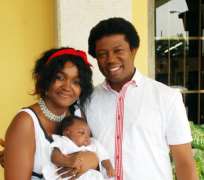 In February 2012, the tourism and culture presenters gave birth to their first child after 14 years of being together as husband ad wife.

We learnt that their son has been dedicated at their church.

We once again wish the couple congratulations on the birth f their child.