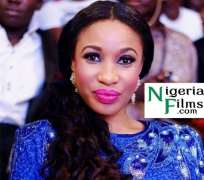 She came into the industry in 2006 like a bang but very shy, timid and with an innocent looking face and character. But today, she is only second to Cossy Orjiakor in controversies, as agreed to by many fans.

Tonto Dikeh, the Ikerre-born actress, who has always loved her smoking habit, has announced that smoking is now a thing of the past to her.

Last year, Tonto was in a bitter war with fellow actor, Van Vicker when she reportedly puffed cigarette at him. His offence? Van allegedly told Tonto to cut down on her smoking habit.

Tonto came on twitter yesterday morning, she tweeted, "I have [a] good news for those who wish me well.

"Hehehehheheehehehe, it's a silly good news but you all [are] going to love this.
I QUIT SMOKING. Puppyface."

Before now, Tonto's reported heavy smoking habit has been a thing of worry to some of her fans.

Now that she has announced this, many fans and industry watchers await the once innocent looking Tonto to live a controversy free life afterwards.