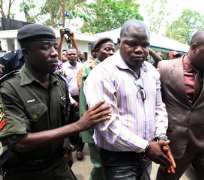 A man armed with grenades and several rounds of ammunition was stopped as he tried to enter a government building in the capital Abuja where two ministers were giving a news conference on Monday, a government security officer said.

"We arrested him with black bags containing three hand grenades and 37 live munitions. We snatched the bag from him at the gate as he was entering the compound at the gate," Akindele James, security officer in charge of the building, told Reuters.

"We handed him over to police."
Aviation Minister Stella Oduah and Youth Minister Bolaji Abdullahi were addressing journalists in the building when the man was seized.

Radio House contains the information ministry and is also home to state radio and another government funded station called Voice of Nigeria. It is often used for government press conferences.

It was not clear whether or not this had anything to do with Islamist sect Boko Haram, a group waging an insurgency against Nigeria's government has made several forays into the capital Abuja from its heartland in the north.

Boko Haram last month turned its sights on media it sees as pro-government, with a suicide car bomb attack on the offices of Nigerian newspaper This Day in Abuja, a paper broadly supportive of President Goodluck Jonathan's administration.