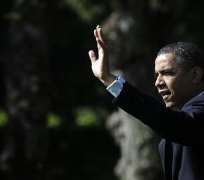 Leaders of major industrial economies meet this weekend to try to tackle a full-blown crisis in Europe where fears are growing that Greece could leave the euro zone bloc, threatening the future of the common currency.

President Barack Obama, the G8 host, has urged European leaders repeatedly to do more to stimulate growth, fearing contagion from the euro crisis that could hurt the U.S. economy and his chances of re-election in November.

British Prime Minister David Cameron, who has been increasingly vocal in urging Europe to do more to resolve the debt crisis, will tell leaders they must work together to stop it from spreading worldwide, an aide said.

No major economic policy decisions are expected from the talks but officials said Obama hoped to promote a discussion on a comprehensive approach to resolving the crisis.

He will seek to cement a bond with France's new leader at the White House later on Friday before heading to Camp David for the talks.

Francois Hollande, sworn in this week as French president, has already made waves by challenging Europe's austerity focus and saying he will pull French combat troops from Afghanistan by the end of this year.

Obama, 50, may use their introductory meeting in the Oval Office to encourage the 57-year-old Socialist to rethink his Afghanistan plans that put France on an earlier exit timetable than other NATO allies.

But the two leaders, who have both expressed support for pro-growth policies in Europe, are expected to form a common front on the euro zone crisis that could dominate this weekend's Group of Eight talks.

Obama's administration spent heavily to tackle the 2007-2009 U.S. recession, and Hollande is seeking to take the edge off austerity with more job-creating infrastructure investments.

He is not alone. Cameron has become increasingly vocal in demanding Europe's leaders act more decisively, Canada's Stephen Harper has been a frequent critic, and of the euro zone G8 members, Italian premier Mario Monti was calling for profound growth measures even before Hollande did.

The G8 summit comes as Greeks are pulling cash from banks amid growing fears that it might crash out of the single currency euro zone. Financial markets fear for the future of the entire currency zone, with Spain's banking sector also under pressure.

Heather Conley, a senior fellow at the Center for Strategic and International Studies, said Hollande and Obama "see things very similarly about the need for a better balance between fiscal consolidation, austerity and economic growth".

One of Obama's closest aides, National Security Adviser Tom Donilon, said the United States welcomed the evolving debate in Europe about the "imperative for jobs and growth", but he said the president's intention was not to drive a wedge between Europe's two biggest economies, Germany and France.

"I don't think that the nature of these conversations are going to be anything like taking one side or the other," he told reporters on Thursday.

"The president looks forward to leading a discussion among the leaders about the imperative of having a comprehensive approach to manage the crisis and get on a sustainable path towards recovery in Europe."

LIMITED POWER
Obama, a Democrat, has pitched a similarly "balanced" approach combining short-term stimulus and longer-term cuts to heal the U.S. economy and stoke hiring that has not recovered from the financial crisis.

His presumed White House opponent, Republican Mitt Romney, has made reducing the U.S. debt load, which has escalated during Obama's tenure, one of his key campaign messages.

"A balanced approach that includes not just austerity but growth and job creation is the right approach," White House spokesman Jay Carney said on Thursday, explaining Obama's message to the G8.

Bruce Jones of the Brookings Institution said because Obama's re-election prospects hinge so directly on the health of the American economy, he has a huge interest in getting Europe on a healthy growth track. "Even if he wasn't in an election season, any president of the United States has a lot riding on the Europeans getting this right," he said.

Cameron, worried about the impact of the euro zone crisis on a weak British economy, will call for a "strong and united commitment to securing the economic recovery and to support job creation," his aide said.

Also on the summit agenda will be the price of oil and policy options to address it, although Brent crude hit a 2012 low on Friday.

"I'm sure that the leaders will discuss the range of options that they might have before them," Donilon said.

Economic policy outcomes are not expected from the closed-door talks at Camp David, a rustic presidential escape about two hours from Washington that Obama has visited far less frequently than his predecessor George W. Bush.

The White House moved the summit to the Maryland retreat from Chicago in part to give the meeting a more informal flavor, as well as to escape the possibility of protests when Russian President Vladimir Putin was slated to attend.

His prime minister, Dmitri Medvedev, will be there instead, along with G8 first-timers Hollande and Yoshihiko Noda of Japan. Monti, Cameron, Harper, Merkel and Obama complete the line-up of leaders and European Commission President Jose Manuel Barroso and European Council President Herman Van Rompuy will also attend.

Van Rompuy held a conference call with the European attendees on Thursday to "coordinate positions".

The White House said each leader would get their own cabin, albeit of different sizes. It will be the largest international summit ever held at Camp David, which was built in the 1930s and is best known as the site of past Middle East peace talks.

Conley of CSIS acknowledged Obama's power to exert influence over Europe over weekend was "somewhat limited".

"Nevertheless, I think the president can play a role of listening, helping leaders find common ground," she said. "We are going to have to watch how this plays out with the frustration in recognizing that it will have a profound impact for the global economy and for the U.S. economy."