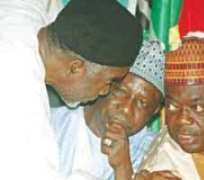 Blasts rock Kano schools, P'Harcourt
AS the region continues to reel under a spate of bombing and allied attacks often claimed by the Boko Haram sect, governors of the 19 states in the North yesterday pledged to intensify 'efforts to find solutions to the problems by reaching out to the stakeholders.'

Besides, the governors said they would ensure free and fair polls in the 2015 general elections to avoid bloodbath trailing the exercise as recently predicted by former Head of State and Congress for Progressive Change (CPC) presidential candidate in 2011 election, Gen. Muhammadu Buhari.

Meanwhile, panic swept through Kano metropolis in late hours of Wednesday following two deafening blasts that turned out to be   an attack on schools in the metropolis.

And in Port Harcourt, the Rivers State capital, a commercial bus loaded with arms and ammunition also exploded around the busy Rumuokoro Roundabout, killing one person and injuring three others.

The explosion in Kano was at the Jaen Primary School in Kumbosto Local Council where many people in the area parked their cars.

An eyewitness said four men came to him and asked him to identify himself, to which he replied that he was a businessman at the Kwari Textile Market and had no identity card.

He said the men asked him to remove his car while the security guard at the place was also asked to leave.

The governors met in Kaduna yesterday behind closed doors for more than six hours.

Chairman, Northern States Governors' Forum (NSGF), Dr. Mua'zu Babangida Aliyu, reacted to Buhari's comments on the 2015 polls after he presented the resolutions of the group in the meeting.

But 'the Forum cautions eminent Nigerians against making inflammatory statements capable of affecting our fragile unity and security. We must be concerned about the unity and development of the country in all ramifications.'

Though he did not criticise Buhari over the comment, Aliyu said: 'In a democratic system, every individual has his ways and there are many of us whose ways of communication is quite different from others. Give the same statement to somebody and he may use a different vocabulary. May be those who may be too concerned have not looked at what other eminent Nigerians have been talking about. I saw one that said Nigeria was going the way of Somalia and another one has been as if there would be war tomorrow.

'For me, that statement should be taken on its own value: 'Do not go and do bad election.' I think that is the whole thing I will take from the statement.

'All of us who are involved in elections, political parties, contestants and voters themselves must be careful so that whatever we do, the semblance of good is there. So, let's take it in our stride and ensure that future elections are seen to be transparent.'

Aliyu, in his opening address at the meeting, said it was unfortunate that since the last meeting of the northern governors on March 8, 2012, the insecurity situation has not abated.

He said: 'Rather, it is worsening and attaining very alarming dimension with attendant negative implications for the economic growth and development of our nation, and indeed our national image

'We are passing through a very difficult phase in the history of our nation, a period that puts our patriotism, nationalism, sincerity and responsibility collectively to test. This is the period that we have to demonstrate individually and collectively our abiding faith in our nation, when we must confront the common enemies of the nation, those who are sworn to destroying the spirit of nationhood through wanton destruction of lives and property'.

Aliyu argued that 'the Federal Government should be commended for its readiness to dialogue on security issues with various interest groups.'

He also stressed that 'we should encourage any individual or group that can make positive contributions to the peace-building process, while at our own level, we should do everything possible to bring peace to reign in our states'.

The damage caused by the explosion was mainly on the cars parked at the premises. A portion of the building was brought down while adjoining houses had their window panes shattered.

There was also another explosion around 8.00 p.m. at an Islamic public school under construction at Farawa Hotoro, where remnants of paint containers, which were used to make explosives, were found.

The Joint Task Force (JTF) had visited the two locations where the explosions took place.

The JTF spokesman, Lt. Ikedichi Iweha, confirmed the incidents but declined to comment further while the police command in the state, through its Public Relations Officer, Magaji Musa Majia, said there were no casualties in the incidents.

In Port Harcourt, the state governor, Chibuike Amaechi, who visited the scene of the blast, dismissed insinuations of a possible terrorist attack which had earlier made the rounds and created panic in the city yesterday.

An eyewitness, Emmanuel Okon, said the 18-seater Toyota Hiace bus painted in Rivers State blue-white-blue colours for commercial vehicles in which the arms and ammunition were loaded was coming from the University of Port Harcourt axis of the East-West Road, when suddenly it broke down close to the Rumuokoro Junction.

Okon, who owns an electronics shop adjacent to the scene, said due to the inability of the bus to move, all the occupants had to disembark.

They then proceeded to solicit support from passersby to start the vehicle by pushing it.

According to Okon, it was in the process of pushing the vehicle that the explosion suddenly occurred, killing one person presumed to be the driver and injuring three others. The explosion sent residents scampering for safety in all directions.

Banking operations and several other commercial activities were immediately grounded to prevent hoodlums from capitalising on the situation to loot. Policemen and other security operatives who arrived the scene cordoned off the vehicle. One of them disclosed to The Guardian that they saw four destroyed nozzles of rifles suspected to be AK-47.

Governor Amaechi said the explosion had nothing to do with any possible terror attack. According to him: 'There were three men; we don't know where they were going to. They were in a vehicle, they had explosives believed to be dynamites. No building was affected. The Commissioner of Police even confirmed that a lady selling by the roadside was not even affected. There is no damage to the road to show that it was bomb.'

The Commissioner of Police, Mohammed Indabawa, told journalists at the scene of the incident that the explosion was not caused by bomb.

The commissioner, who supervised the operations of the command's Bomb Disposal Unit, said samples had been collected from the scene for further investigations.

'This is not a terrorist attack, I didn't tell you it was a bomb. If it were a bomb, you would have seen the impact on the road.

All the houses around here would have been affected, even including the woman selling oranges here, but she was not, ' he said.