POLICE BEATING OF EACH OTHER, DRUNKENNESS AND SHOOTINGS IN PUBLIC ARE PREVENTABLE 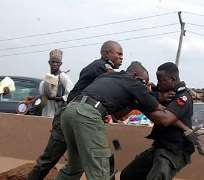 Extremely excitable acts and violent encounters among uniform police officers in Nigeria are now periodic sights in the public view. These abnormal behaviors which could further give the police bad image around the nation require full psychological attention.

The occasional eruption of fights between armed police officers, the exhibition of drunken behaviors and sporadic shooting by male officers mostly, in public places are sights that any reasonable citizen would hate to see.

These personality-disordered behaviors send a wrong message of indiscipline, character disorder, impulsiveness, dangerousness and madness about anyone in police service.

There is urgent need for the new management of the Nigeria police to reduce these ugly messages, horrible perceptions and unpleasant images particularly when these behaviors are not reflective of most police personnel, and these public images even in one wild or hostile officer remains all too many.

The sometime hostile police-public engagements which have sometimes resulted in outright violence by an officer against a citizen could be the hand work of a few officers and those are the ones that need to be weeded out during enlistment periods, and fully identified if they are already in the police service.

The demand on police to fight crime remains enormous and as such the stress of the work could be so exerting on some officers that they end up acting out in public between themselves with some of these responses been directed to a society that does not fully appreciate and celebrate their hard work.

Nonetheless and in spite of one’s condition, a police officer must constantly stand the test of meeting the full standards of law enforcement professional.

As such the all too common exposure to corruptible, pilfering, intoxicating, sexual abuse and other kinds of illegal/unethical/bizarre behaviors by some police officers are detrimental to the police organization and to the people; therefore these acts need full taming now.

A more control measure to fighting these problems lies with psychological testing of the soon-to-be and the already serving police officers.

The Acting Inspector General of Police, Mr. Muhammed Abubakar as part of his renovation agenda should mandate that anyone entering the police work must go through psychological screening, testing and evaluation.

With the use of psychological testing, clinical and forensic psychologists are able to fully reveal the inner side of humans in terms of intellectual, personality, and visual-motor and ethical functioning, as well as security and law enforcement tendencies.

To become a certified entrant to the police training college either as a recruit or as a senior police officer the individual must pass a series or battery of psychological tests carried out mainly by a licensed or certified Clinical and personality psychologist, and certainly not by psychiatrists as they are mainly certified in medication aspects of mental health issues.

By involving psychological tests in police work, cases of psychological imbalanced individuals are caught earlier and cutoff quickly , and for those already serving but psychologically shaky, treatment in form of therapy may be offered, and in some cases they could receive medication—this where the psychiatrist comes in mainly.

In the face of many challenges that the Nigerian police is currently fighting with it will be unusual if psychological testing does not become mandated in training matters except the current police management does not mind hearing and seeing of very disturbing police behaviors in public periodically.

The Acting Inspector General of Police, Mr. Abubakar and his management team should assist the nation in moving the police into modernity in terms of continuously professionalizing the Nigerian police.