FEMI FANI-KAYODE AND THE PRIZE OF TELLING THE TRUTH 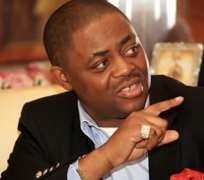 Winston Churchill once observed that a lie gets halfway around the world before the truth has a chance to get its pants on. The idea behind this is that for someone to make up a claim, and for others to repeat it is very easy, while to compile the evidence and careful argument to show it is wrong is very difficult. So, as long as there are people who want to mislead you, there will likely often be more misinformation than honest information. Farida Waziri outrightly brought shame to the anti-graft task in the country; painfully so she destroyed all the good legacies the pioneer chairman of EFCC (Nuhu Ribadu) left behind. If this government was serious enough someone like Farida should have been in jail by now.

This ugly situation actually prompted me to emphasis on the filthy behaviour of some parasites in government. Telling the truth in Nigeria, as I have now discovered, can be a rather precarious thing to do and certainly does not endear you to people in power or authority. I have been told that I will never be allowed to enter Nigeria again although, as usual, the implied threats are never put down, officially, in writing. I would be devastated if this ban is indeed official because despite the flotsam and jetsam in power, I have a deep respect for ordinary Nigerian people.

Just recently we gathered that Supreme Court dismissed the appeal filed by former aviation minister, Chief Femi Fani-Kayode, challenging the admissibility of computer generated statement of accounts under the old Evidence Act. The appellant (Chief Fani-Kayode) had, through his counsel, Chief Ladi Williams (SAN) raised objection at the Federal High Court which was upheld. The Court of Appeal, however, set aside the decision of the trial court and admitted the said Statement of Accounts in evidence. Chief Fani-Kayode appealed against the decision of the Court of Appeal to the Supreme Court.

Whilst the matter was pending at the Supreme Court, the Evidence Act was amended; and Computer-Generated Bank Statements were made admissible by Section 84 of the new Evidence Act. Obviously the intent of these vicious characters is to render the law retroactive through the back-door at the expense of the appellant, but it is very clear that this is simply a journey to failure, even a layman in the legal profession will know this. At the same time, the Chief Judge of the Federal High Court, in exercising his administrative powers, transferred Justice Mohammed from the Lagos Division of the Federal High Court to Enugu Division and the matter was therefore re-assigned to a new Judge, Justice Binta Nyako. The Economic and Financial Crimes Commission (EFCC) through its counsel, Mr. Festus Keyamo, therefore, filed a motion to dismiss the appeal before the Supreme Court arguing that the appeal has become academic in that the proceedings that gave rise to the appeal no longer exists.

Consequently, at the resumed hearing of the appeal, the panel of the Supreme Court, after taking oral arguments from parties concluded that the appeal has indeed become academic in that the proceedings that gave rise to the appeal have become spent. The Supreme Court therefore directed Chief Williams (SAN) to withdraw the appeal. The appeal was subsequently dismissed for being academic, while Chief Fani-Kayode was directed to go back to the new Judge, Justice Nyako, to face his trial. However some form of joke was displayed at the open Court when a presiding judge made suggestions to Chief Ladi Rotimi Williams that he knew his client must have given him so much money for consultancy fees, and yet any of such money was never spread to him and his colleagues, my conclusions to such indecency was that, no one in Nigeria is likely to get justice in Nigeria particularly when you believe and hold-on jealously to the merit of your case without the spread of ‘legal-tender’ among the members of the bench. We are all privy to what happened to James Ibori who was said to be discharged and acquitted in one of our courts, but was later imprisoned for the same charges in United Kingdom, what an irony? A big slap on our justice delivery system.

In recent times Chief Femi Fani-Kayode has been talking tough and very brilliantly too over some contentious and topical issues in the country, one of his prominent reactions was on the convocation of sovereign national conference. Chief Femi Fani-Kayode said if a Sovereign National conference was not convened as soon as possible, then “the nation is finished.” Pointing that India, Sudan, and Nigeria were the three main amalgamations by the British Empire and of the three; only Nigeria still exists as one.

Barely a week after the National Security Adviser, Gen. Owoye Azazi, accused the PDP of fuelling the rise of Boko Haram due to its politics of exclusiveness, Chief Femi Fani-Kayode equally fingered the excesses of the party as the reason the activities of the sect was rising. This was made public at an event to mark the 50th birth anniversary of the chairman/publisher of Leadership Newspaper Group, Mr. Sam Nda-Isaiah, at the International Conference Centre, Abuja. He advised the party to go back to the drawing board with a view to bringing together all aggrieved members of the party, both past and present, for reconciliation. “If you look at the comments of the NSA a few days ago, and for me I think that is the most explosive comment that has been made in the last couple of years. I think we really need to sit down and think about the things that are happening in this country. Let me repeat for the purpose of clarification. He said that the reason why Boko Haram has not been contained and the causes for Boko Haram can be traced to the PDP and the politics of exclusion that the PDP has played in the northern part of Nigeria since the time of the convention. These are very serious words and I believe and I may be wrong but I believe that they are more than true.’’

Speaking in an ecclesiastical tone, Chief Fani-Kayode said: “There is only one thing left for this PDP government to do, if it wishes to survive and that is; reach out to those alienated not only within the PDP but outside the PDP too. The fact remains; the excesses of our party, the PDP, are part of the problem we have in this country today. The insensitivity of some of our party leaders is part of the problems we have today. While charging Nigerians to hold the government to live up to its responsibilities, he noted, “Not enough people are putting this government on its toes. Not enough people are being sensitive to the fact that blood is flowing everyday in this country. A situation whereby every day, we hear of people dying and people are being killed and nothing is being done about it… I believe the only way to stop this carnage is for us to sit down and think twice as a country”. One may not be far from the truth that comments like these have caused him quite a lot, he has paid many prices, simply because he was telling the truth, unfortunately that is the society where we live in today called Nigeria.

I think it is high time the Nigerian media started embarking on genuine and reasonable investigative exercise in order to ensure that rumours and lies are not misconstrued for news. Although one cannot underestimate the threats local journalists have experienced over many years, and there are those who have ended up in darkest dungeons for telling the truth, so I salute some courageous scribes for their heroic determination to make sure facts surface. Sadly, not all journalists subscribe to that ethos and they opt for something worse than telling the truth silence. Today I will not name and shame those journalists, columnists, commentators and political attack dogs; they know who they are and they are working in positions of great influence where their words and pictures could easily tell the world about what is really happening on the ground in Nigeria. What I would say to them is that if they are too afraid to tell the truth, or even cover the most basic stories in an open way, then they are in the wrong profession and doing a great disservice to journalism.

Journalism is a noble profession and hundreds of those that practice it have paid the ultimate price for trying to get the truth out even in places like Palestine, Iraq, Afghanistan; infact, in war and conflict zones across the globe as well as within the most sinister of police states. It is an aberration to see journalist as an extension of a government apparatus which uses fear and intimidation to stop the truth getting out. At the end of the day the truth is there. The Nigerian government might attack it, ignorant individuals may choose to ridicule it, but it will not go away and the truth will definitely play out. To all those Nigerian journalists who have continued to defend the truth, I salute you; and to those miserable individuals who remained silent or twisted the facts, there is a chance to redeem yourselves.

Telling the truth might be an act of courage but it is also a powerful entity, which can open doors, shame governments and mobilise people to fight for what is right and what is just. Everyone is entitled to their opinions but to paraphrase the late C.P. Scott, editor of the Guardian newspaper from 1872 until 1929 – the truth is sacred.

For those that have been fed with so much lies and treacherous deceit, the article in this link addressed all the misinformation that has been spreading like wild fire by the agents of horror: http://thewillnigeria.com/opinion/4692-FANI-KAYODE-THE-EFCC-AND-THE-COURT-APPEAL.html.

However, this scripture has said it all (Proverbs 24:19-22) ''Do not fret because of evildoers or be envious of the wicked; for there will be no future for the evil man; the lamp of the wicked will be put out. My son, fear the LORD and the king; do not associate with those who are given to change, for their calamity will rise suddenly, and who knows the ruin that comes from both of them?''. My advice is that Fani-Kayode should remain steadfast in God because the storm will soon be over; it’s just a matter of time.