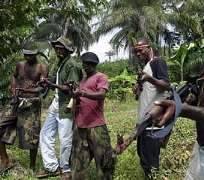 UYO, May 11, (THEWILL) - Business activities in Uyo, the Akwa Ibom State capital, were temporarily halted in the early hours of Friday, when armed robbers laid siege to the Aka Road, near Ibom Plaza, seizing millions of naira from a customer who was said to be lodging it with one of the new generation banks in the metropolis.

An eyewitness said that the robbers, numbering about five, disguised in the Special Anti-Robbery Squad (SARS) uniform and trailed the customer from the banking district located along Udo Udoma Avenue to Aka Road, location of the bank.

The hoodlums reportedly arrived at the scene of the crime in a black Toyota Corolla salon car, blocking all entrances to the premises and firing gunshots into the air to scare away passers-by. They then swooped on their victim and carted away the sacks of money from his white Toyota Hilux truck.

THEWILL can report that while the incident lasted, both pedestrian and vehicular movements were halted, and policemen attached to the banks in the area took to their heels.

Commissioner of Police Umar Gwadebe, who confirmed the report in a telephone conversation with THEWILL, said he received the report but claimed that the robbers did not succeed in stealing the money.

Speaking through Police Public Relations Officer ASP Onyeka Orji, Gwadebe said that it was the effort of the men of the Command, who swung into action, that warded off the criminals from gaining access into the bank.

He said that the Command was on top of the situation, as it had already begun a manhunt for the robbers, and urged residents of Uyo to go about their duties normally while volunteering information that could lead to the arrest of the hoodlums.