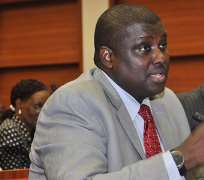 ...Denies Bribery Allegation
ABUJA, May 08, (THEWILL) - There was mild drama on Tuesday at the Senate’s resumed probe of the management of Police Pension Funds when chairman of the Joint Committee on Establishment, States and Local Government, Senator Aloysius Etok brazenly accused Abdulrasheed Maina, head of the Pension Reform Task Team, of stealing the funds.

He also called on the Nigerian Police and the Independent Corrupt Practices and Other Related Offences Commission (ICPC) to commence investigations into allegations of bribery and bias levelled against the committee by the Maina,

Etok, who stated that the report of the senate committee will be out soon, castigated Maina for refusing to appear at public hearings to defend himself “on numerous petitions and evidences of embezzlement, misappropriation, misapplication and outright stealing of pension funds” that were backed up with original documents and exhibits to prove his culpability

“Ordinarily, this committee and I had intended to disregard such foul alarm and cheap blackmail as a mere ranting of a fraudulent, corrupt and crooked fellow since such is orchestrated to divert attention from bare facts and incontrovertible evidences of fraud, misappropriation, mismanagement and outright stealing of pensions funds by the Pension Reform Task Team,” said Etok, offering to be tied to a stake and shot if it found to have truly demanded N2 billion bribe from the Pension Reform Taskforce Team.

“I come from a very humble background. I have never seen N1b before not to talk of asking for N2b. Probably if I see N1, I will collapse and die; so I cannot ask for such bribe.” He added.

“I once called on the Nigeria Police Force, the ICPC, and other law enforcement agencies to commence investigations into this allegation. If proved to be true, I shall offer myself to be tied to the stake and be shot as an additional antidote for craft and corruption in our society.”

Dismissing the bribery allegation further, Etok said he could never have demanded bribe to be paid from “blood” pension money. “Even if I need money, I would not want pension money because it is blood money. If you show affluence with the money here on earth, God will put you in abject poverty in hell,” he maintained.