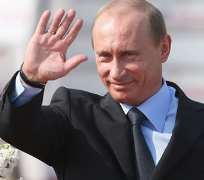 President Vladimir Putin asked Russia's lower house on Tuesday to confirm his ally Dmitry Medvedev as prime minister in a job swap that has angered many Russians and sparked protests against the men's grip on power.

"I count on your support," Putin said at the end of a brief speech to the State Duma in which he presented Medvedev, president for the last four years, as an experienced leader who would not let Russia down.

The Communist Party, the second biggest in the lower house, said it would oppose Medvedev. But his United Russia has enough seats to guarantee his confirmation by a simple majority, and nationalist Vladimir Zhirinovsky's Liberal Democrats said they would also back him.

Before the Duma began its debate, police swooped on about 150 people who staged an all-night sit-in protest in a park near the Kremlin and detained at least 22. Others just packed up their blankets and left.

Police also detained opposition leaders Alexei Navalny and Sergei Udaltsov at the protests but later freed them. They had detained more than 700 people in the previous two days, many of them after a clash with protesters at a rally on Sunday.

The protesters fear Putin's inauguration for a six-year term on Monday, after four years as prime minister and eight before that as president, heralds political and economic stagnation in the world's largest country.

Many Russians saw his choice of Medvedev, 46, as premier as a slap in the face for democracy, and evidence that they have no say in how the country of more than 140 million is run.

"Everything as always has been decided without consulting the people ... People don't like this," said Ilya Ponomaryov, one of the organizers of months of protests that were sparked by allegations of electoral fraud last December.

Medvedev will be a less powerful prime minister than Putin, 59, who remained Russia's dominant leader as premier after steering his younger friend into the Kremlin in 2008 because of a bar on a third straight term as president.

HUGE CHALLENGES
They face a huge challenge in modernizing the country and reforming the $1.9 trillion economy to reduce its heavy dependence on energy exports, which makes it vulnerable to any reduction in the global price of oil.

Putin has shown his loyalty to Medvedev by nominating him despite widespread criticism of his meager achievements as president. But Putin could soon make him a scapegoat for any problems or bow to pressure to call an early election because of complaints about the fairness of the last poll in December.

"Given all the problems, and the radicalization of protests, I don't think the Duma will last longer than a year-and-a-half or two years," said Gennady Gudkov, a member of the leftist Just Russia party who has helped to organize the street protests.

Putin set out their intentions on Monday by ordering the government to boost investment and shake up state-run industries to usher in a "new economy".

He set long-term goals that included raising capital investment to no less than 25 percent of GDP in 2015, from the current level of 20 percent, and creating 25 million high-productivity jobs by 2020.

He and Medvedev face a battle to quell rivalries between liberals and conservatives, and Putin's choice over who joins the cabinet will go some way to showing how determined and able he is to push through reforms and privatization.

Both leaders say they want to attack bureaucracy and overhaul the armed forces. But after years of hearing such promises and not seeing them fulfilled, many Russians are frustrated that the same men are still in charge.