BEYOND THE ELECTION OF THE NEW PRESIDENT OF THE WORLD BANK: MATTERS ARISING 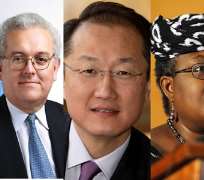 The election of the President of the World Bank has been held, but the ripples generated by the choice of the winner of that election is still reverberating across the globe.

Originally, there were three contenders for the post namely Dr. Jim Yong Kim, a Korean-American who was nominated by President Barak Obama and the United States of America (U.S.A.), Mr.Jose Antonio Ocampo from Colombia, and the Finance Minister and coordinating minister of the Nigerian economy, Dr. Ngozi Okonjo-Iweala.

As the clock of time ticked towards the Monday, 16th April 2012 date that was set for the election, one of the contestants, Mr. Jose Antonio Ocampo allegedly stepped down for Dr. Okonjo-Iweala.

The withdrawal of Mr. Jose Antonio Ocampo no doubt boosted Dr. Okonjo-Iweala's chances of clinching the post, and it raised the hopes of Nigerians and many developing countries staunchly supported her throughout the selection process.

Undoubtedly, Dr. Okonjo-Iweala was quite confident that she would win her rival, Dr. Jim Yong Kim at the elections given her intimidating credentials and profile which were relevant to the post.

Well, the elections have come and gone and the most powerful personality in the whole world, and also the President of the most powerful nation on earth, and unarguably the intellectual and economic powerhouse and knowledge base of the world, the United States of America (U.S.A.), think otherwise.

However, the choice of Dr. Kim for the World Bank Presidential position against Dr. Okonjo-Iweala, calls for a serious sober reflection on the part of the latter. Her loss at the election could be attributable to the poor performance of the Nigerian government and its failure to improve the welfare of its citizens.

The facts of the case are quite clear. Whereas Dr. Okonjo-Iweala was generally seen as having not performed creditably ever since she came into the public klieglight as Finance Minister of Nigeria, the opposite is the case in respetct of the winner of the election, Dr. Kim.

Dr. Kim was (and is) seen as a humane and public-spirited personality, quite unlike Dr. Okonjo-Iweala who was (and is) generally seen as not having regard for the feelings of the masses.

Through his non-governmental organization (N.G.O.), Partners in Health and other health related organizations that he had worked with including the World Health Organization, it is an indisputable fact that Dr. Kim positively affected the lives of the citizens of many poor and developing countries. Contrast this testimony with Dr. Okonjo-Iweala's negative picture.

Between 2003 and now when she has been at the corridors of power in Nigeria, the citizens of the nation have suffered a lot as a result of anti-people financial policies which have been conceived and implemented in the country, and the people have been greatly impoverished by those obnoxious policies. She is said to be the brain behind most of those unpopular financial policies to which the suffering of the people of Nigeria is traced.

There has been a painful and persistent degeneration of social infrasctructure in Nigeria, while public officials to whom enormous amounts are allocated in the budgets for their public offices, are not held accountable for the non-execution of the projects for which those funds are allocated.

For many years running, the country's trans-national highways have become death traps. Many people, including public officials alike, have so far lost their lives through road accidents, yet nobody in government has so far deemed it expedient to ask questions as to what actually happened to the huge annual allocations for road maintenance in the national budget. Virtually every government agency has either collapsed, or has become dysfunctional.

Even in the power sector, the national monopoly, Power Holding Company of Nigeria PLC, is a national embarrassment. In spite of the fact that the company issues bogus electricity bills to the citizens on a monthly basis, there is no commensurate service that is being rendered by the company; even the bills are estimated bills, yet the Economic and Financial Crimes Commission (E.F.C.C.) has never deemed it expedient to go after the power monopoly. They have only been going after corrupt politicians even when an economic crime which adversely affects virtually every Nigerian, is being perpetrated by the Power Holding Company of Nigeria PLC through their crazy billings.

Recently, the government approved an increase in the electricity tarriffs for a service that is practically non-existent.

Even the much talked about subsidy reinvestment and empowerment programme through which the government had planned to invest the gains from the fuel pump price increase, for that is what excactly it was, has eventually turned a ruse so far, as the highways and social infrastructure get worse everyday without any proactive action to fix them.

Also recently, the Federal Road Safety Commission got the approval of the Federal Government for the issuance of new national drivers licence and the phasing out of all the existing ones, without any consideration for those licence owners whose licences had not expired, and this was to have been done at great cost to the citizenry. It took the intervention of the National Assembly for the policy to be suspended. The National Assembly rightly reasoned that that policy would further impoverish the citizens, hence they refused to pass the bill for the legalization of that wicked government policy, for that is what it is.

Another source of national embarrassment were the check-points of the Nigerian Police Force on the nation's highways. Policemen mounted several road blocks on the nation's highways where they extorted money from motorists in broad daylight. Government officials were seeing these eye sore, yet none of them including the nation's economic managers, bothered to take action to stop it, even after several pictures of the ugly scenes had been posted on the internet. Top Nigerian police offiicials only denied that such a practice was actually going on until just recently when the new Inspector-General of Police, Mr. Mohammed Abubakar took the bull by the horns and dismantled the road blocks. Efforts of some police apologists to bring back the road blocks, were thwarted by the Federal House of Representatives which threw out the bill for the reinstatement of the police road blocks.

The general opinion of informed minds is that Dr. Okonjo-Iweala's motivation is to pander to the whims and caprices of the international organizations which have been holding her nation in the jugular through insitence that obnoxious economic policies are strictly implemented in the country, whether or not those policies are workable or socially beneficial.

Government and public office is all about positively touching lives and consciously solving the problems of the society. You cannot rightly claim to be an effective public official when you are not adding value to the quality of life of your people; as the Finance Minister and coordinating minister of your country's economy, the stakes and the expectations of people from you are much higher; in your quest to be the President of a global financial and economic institution like the World Bank, your past overall performance in public office is bound to come into question.

All your claims to erudition, intelligence, professional sagacity and wealth of functional or cognate experience are worthless if you cannot translate these claims into concrete achievements and tangible evidence of positive impact on people's lives.

This exactly is the premise where the recent election of the World Bank was won by Dr. Jim Yong Kim, and lost by Dr. Okonjo-Iweala.

As Dr. Kim takes over the mantle of leadership at the World Bank on 1st July 2012, he comes with the goodwill, prayers and support of all the people in the world, especially the impoverished people of developing countries of the world whose lives he has positively touched through his non-governmental organization (N.G.O.), Partners in Health, and through his sterling performance in public office over the years.

The lesons ought to have been learnt that public office is not all about credentials, professional background, wealth of functional experience or profile, but about service delivery and positive impact on people's lives. Nigeria and indeed Nigerians would be better if the lessons learnt, are gainfully applied.

Disclaimer: "The views/contents expressed in this article are the sole responsibility of Ochiabuto Kalu Okorie and do not necessarily reflect those of The Nigerian Voice. The Nigerian Voice will not be responsible or liable for any inaccurate or incorrect statements contained in this article."
Articles by Ochiabuto Kalu Okorie
27-7-2013  Nigeria: A Nation Of Absurdities27-7-2013  The Gay Rights Law: Pleasing The Ungodly To Displease God20-5-2012  Mr. President, Is This The Breath Of Fresh Air That You Promised Nigerians?18-5-2012  Unmasking The Enemies Of Our National Security16-5-2012  Making The Difference Really Clear In Abia StateMore...