MINOR SIGNS OF THE LAST DAY 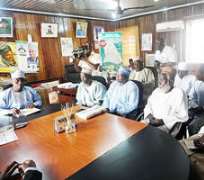 The Secretary to Kwara State government (SSG), Alhaji Isiaka Gold (left) with members of the State Quranic memorization committee during their visit to the SSG in Ilorin recently.

Abu Musa Ash'ari (May Allah be pleased with him) narrates that prophet Muhammad (Peace be upon him) said, 'The world will come to an end when…

•When it will be regarded as a shame to act on Quranic injunctions.

•When it will be hot in winter (and vice versa).
•When the length of days is stretched, i.e. a journey of a few days is covered in a matter of hours.

•When orators and lecturers lie openly.
•When people dispute over petty issues.
•When women with children come displeased on account of them bearing offspring, and barren women remain happy on account of having no responsibility of offspring.

•When oppression, jealousy, and greed become the order of the day.

•When lies prevail over the truth.
•When violence, bloodshed and anarchy become common.

•When immorality overtakes shamelessness and is perpetrated publicly.

•When legislation matters pertaining to Deen (religion) is handed over to the worst elements of the Ummah (community), and if people accept them and are satisfied with their findings, then such persons will not smell the fragrance of Jannat (paradise).

•When the offspring become a cause of grief and anger (for their parents).

The following is part of a lengthy Hadith narrated by Abdullah Ibn Mas'ood (May Allah be pleased with him) when he inquired from Prophet Muhammad (peace be upon him) about the Signs of End Time:

•Music and musical instruments will be found in every home.

•People will indulge in homosexuality.
•There will be an abundance of illegitimate children.

•There will be an abundance of critics, tale-carriers, backbiters and taunters in society.

•People will establish ties with strangers and sever relations with their near and dear ones.

•Hypocrites will be in control of the affairs of the community and evil, immoral people will be at the helm of business establishments.

•The Masjid will be decorated, but the hearts of the people will be devoid of guidance.

•The courtyards of Masjids (mosques) will be built beautifully and high mimbars (pulpits) will be erected.

•Gangsters and evil people will prevail.
•Various wines will be consumed excessively.
Auf bin Malik (May Allah be pleased with him) says: I came to Prophet Muhammad (peace be upon him) while he was in his skin tent during the Tabuk expedition. He said to me, 'Count six things before the advent of Qiyamah (end time):

1 My death
2 The conquest of Jerusalem
3 Mass deaths amongst you people, just as when sheep die in large numbers during an epidemic

5 General anarchy and bloodshed, that no Arab household will be spared from it.

6 Then a life of peace as a result of a peace agreement between you and the Banil Asfaar (Romans) which they will break and attack you with a force consisting of eighty flags and under each flag will be an army of twelve thousand men.' (Hadith: Sahih Bukhari).

IRAQ and SYRIA
Abu Nadhrah says: 'We were sitting in the company of Jabir bin Abdullah (May Allah be pleased with him) when he said: 'Soon the people of IRAQ will neither receive any food (grain) nor any money.'' We asked, 'Why would such a thing happen?' He replied, 'Because of the non-Arabs.' (i.e. they will prevent food from going into Iraq, in the form of 'sanctions' to this day.) He then said: 'Soon the people of Shaam (SYRIA) will neither receive any money nor grain.' We asked as to why this would happen. He replied: 'Because of the Romans (Christians).'

CONCEITED PEOPLE:
Hadhrat Abbas (R.A) narrates that Rasulallah (Sallallahu Alayhi Wassallam) has said, 'Islam will spread far and wide, across the seas. Horses will cross the land and seas in the cause of Jihad. Then a time will come wherein a group of people will emerge which recites the Quran. They will claim,

'We have recited the Quran and is there anyone who understands the Quran better than us? There is NO ONE more proficient than us in the study of the Quran.'

Then Rasulallah (Allah's Messenger) asked the Sahaba (companions), 'Do you see any good in their claims?' The Sahaba replied, 'No.' Rasulallah (Sallallahu Alayhi Wassallam) said, 'But these conceited claimants will be from my Ummah and will be the fuel of the Fire.'