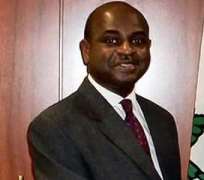 Dr. Kingsley Moghalu, CBN’s deputy governor (financial system stability) made the point in a submission to the Federal House of Representatives ad-hoc committee on capital market, headed by Ibrahim El-Sudi.

Members of the House, who expressed concern over the state of the capital market after committing trillions of naira investors' fund, called for prosecution of officials of the regulatory bodies including CBN, SEC and the NSE, for aiding and manipulating sharp practices in the capital market.

“The global financial meltdown led to the withdrawal of $15 billion by foreign portfolio investors, further exacerbating the crisis in the capital market, perceived uncertainty in the economic environment (particularly Niger Delta crisis), panic recall of margin and share of loan facilities by banks caused many investors to sell their stocks as well as downward renegotiated Foreign Trade Support lines given to Nigerian banks,” he argued.

He disclosed that the intervention of CBN was to save the banking sector from total collapse, considering the level of non-performing loans of the eight banks as well as level of indebtedness worth trillions of naira. “All the banks have serious liquidity crisis,” he said, adding that most of them could not meet the 25 per cent liquidity rate.

Moghalu also accused management of some of the Nigerian banks of manipulating the bank shares through some stock broking firms.

“Banks' reports to regulatory authorities and investors were seldom accurate, thus depriving the authorities of the right information needed to take timely and effective regulatory decisions; investors and other stakeholders were also misled by distorted information supplied by quoted companies while companies made information available on a selective basis thereby impairing investment decisions.”

He added that the diagnostic and forensic investigation conducted by CBN revealed insider abuse, including concealment of insider loans; use of depositors' fund to acquire bank's own shares (fraudulent share buy-back schemes) and other governance abuses as causes.

On the N620 billion injected by the apex bank into the eight troubled banks, Moghalu disclosed that the money has been paid to the account of the apex bank. He said there was no need for appropriation by the National Assembly before taking such intervention.

In his presentation, Umaru Ibrahim, managing director of Nigerian Deposit Insurance Commission (NDIC) explained that the intervention of NDIC was acknowledged by Remi Babalola, a former Minister of State for Finance.

He noted that the publication of the state of health of the banks had been criticised by some banks, but that the Commission had stood its ground.

Ibrahim also called for more powers for the Commission to take deliberate steps in addressing the problems in the future. He revealed that NDIC had taken steps, in 2008, with former SEC director general to raise concern about what was happening because as at that time, the regulatory exercise was so frustrating.

He added that CBN revoked the operating licences of the three intervening banks with N809 billion depositors' fund and protected 6,667 jobs and 3.7 million customers; and approved subsequent transfer of assets, among others, after due consultation with the presidency.