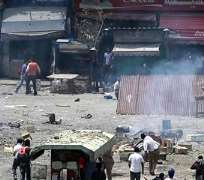 Unidentified "thugs" armed with guns or batons attacked demonstrators who included hundreds of ultraconservative Salafi Islamists protesting at the exclusion of their candidate from this month's vote, state news agency MENA reported.

The violence casts a deep shadow over the presidential election due on May 23 and 24, with a run-off in June, and highlights the fragility of Egypt's transition to democracy, which has been punctuated by violence and political bickering.

Security and medical sources gave a toll of 11 dead and over 160 wounded in the clashes outside the Defence Ministry in central Cairo's Abbasiya district. The fighting raged on unabated through the morning, but subsided in the afternoon.

"Where is the army? Why are they not stopping these people?" cried a bystander as the violence persisted. Shots rang out as young men dashed back and forth across debris-scattered streets, hurling rocks, glass and petrol bombs.

"Down, down with military rule," yelled protesters.

Wounded men were hauled away as others filled bottles with petrol while shots rang out. A Reuters witness saw some combatants carrying guns and one with a sword.

The army sent in extra vehicles and troops, but pledged in a statement not to disperse peaceful demonstrators.

Troops had earlier blocked a road to the ministry with army vehicles, barbed wire and troops in riot gear. Graffiti hostile to the ruling generals plastered walls on a main road nearby.

Days of street violence also preceded the start of a staggered parliamentary election in November.

The Muslim Brotherhood, which topped that poll, said it would boycott a meeting the army had called for Wednesday with political party leaders to defuse a crisis between the Islamist-dominated parliament and the army-backed interim government.

CANDIDATES SUSPEND CAMPAIGN
The Brotherhood's Freedom and Justice Party said the violence signalled an attempt to "obstruct the handover of power" and its presidential candidate, Mohamed Mursi, said he would not campaign for two days to mourn the dead.

The other leading Islamist candidate, Abdel Moneim Abol Fotouh, suspended campaigning indefinitely in protest at the way the authorities had handled the protest, a spokesman said.

"Anything related to campaigning today including voluntary activities on the ground is being suspended," Ali al-Bahnasawy, Abol Fotouh's media adviser, told Reuters.

The unrest, limited to Cairo, is on too small a scale so far to influence the election, said Mustapha Kamel Al-Sayyid, a political science professor at Cairo University. "These are small groups," he said, adding that if anything, the trouble would intensify popular demands for an end to military rule.

The army, which has pledged to hand over to civilian rule after the presidential election, has faced mounting criticism of its handling of the turbulent political transition since a mass uprising overthrew President Hosni Mubarak in February 2011.

Many Egyptians suspect the generals will seek a strong influence even after the new president assumes power.

Official campaigning for the presidential vote began this week under a cloud, with the Brotherhood demanding that the army sack the cabinet of Prime Minister Kamal al-Ganzouri.

Parliament had already suspended its work, saying the government was failing to respect its decisions and ministers had repeatedly failed to show up for parliamentary hearings.

Liberal pro-democracy groups, which were also involved in the sit-in that protesters have maintained outside the Defence Ministry for the past six days, condemned the dawn attack.

The April 6 Youth Movement decried the "massacres" and demanded the army be held to account for its "crimes committed against the revolution and revolutionaries".

Many of the demonstrators were supporters of ultraorthodox Salafi sheikh Hazem Salah Abu Ismail, whose disqualification from the election drew accusations that the ruling military council was trying to dictate the result in advance.

Some were "Ultras", or fans of Cairo's Al Ahly football club, angry at the deaths of 74 supporters in violence after a match in Port Said, in northeast Egypt. They accuse state security forces of causing the deaths in revenge for the involvement of Ultras in the uprising against Mubarak.

"We are here to demand that the army council hand over power," said 19-year-old Tarek Samir, one of the protesters.