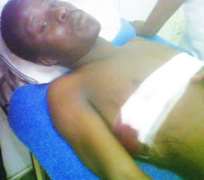 Survivors of yesterday's blast
At least, 15 worshippers, including two professors and some non-academic staff of the Bayero University, Kano (BUK), were feared killed Sunday morning by suspected Boko Haram gunmen who besieged the institution's church premises.

BUK claimed only one professor died.
The two dons believed to have died in the attack were Professors M .T. Ayodele of the Chemistry Department and Andrew Leo of the Library Department.

Equally killed were Mr. Sylvester Ada, who is state president of an Idoma socio -cultural society within the Catholic church, known as 'SS Peter and Paul'. A Chief lecturer in the Federal College of Education (FEC), Kano, Dr. (Mrs) Ololobo, also died in the attack.

An Ogoja lady, who is married to an Idoma man that lectures at the FEC also died in the attack. The deceased, whose name could not be established by Press time, was performing her child's dedication at the church, said a source, who noted that her child was picked up at the gate of the university after the incident.

'Today was her child's dedication. She went with the baby, but never came back', he stressed.

About 15 other persons, who are members of the university community or are living in neighbouring settlements and communities, were also injured. The wounded, have all been rushed to hospitals and clinics in the state capital, said a source, who offered that some of the injured were in life- threatening conditions, an indication that the death toll could rise.

Head of Public Relations, BUK, Alhaji Mustapha Zaharadeen, however, confirmed the death of only seven persons, adding that some of the wounded were taken to the university's clinic, while the deceased were moved to the Aminu Kano Teaching Hospital's morgue.

Two churches were in worship sessions at the time of the incident. They are Saint Stephen Catholic Chaplain which holds its Sunday service somewhere at the Sports Complex area of the old campus and an inter -denominational worship, which holds its service at one of the two theatres in the same campus. Members of the Hausa Service, ECWA section, were about to enter for their own worship session when the assailants struck.

It was confirmed that a number of un-detonated bombs were found in different locations in the university soon after the incident, including a heavy bomb planted inside the theatre complex, which would have brought down the 250-capacity complex if it had detonated. Witnesses said a vehicle, believed to have been primed with explosives, was equally impounded, even as members of the Police's Bomb Disposal Unit were spotted at the university trying to clean up the site. The entire area was immediately cordoned off by the Joint Security Task Force (JTF).

Security sources said that some suspects have been arrested by the task force following the incident that has disrupted activities in the state capital, adding that 'they are making progress'. Witnesses told reporters that the suspected members of the sect drove into the old campus in about six motorcycles and opened fire on the Christian worshippers in their various locations. While some said that the explosions preceded the shootings, others held that the shootings occurred before the blasts. Another account said that the bombs were actually used by the sect to precipitate confusion for their escape, adding that after they had accomplished their objective, they detonated a couple of bombs and escaped.

Daily Sun observed that soon after the attacks, several churches in the state capital suspended their Sunday services as members quietly left to their homes. A few continued with the service amid panic and fear. Lecturers, a majority of whom had their families in the university, remained indoors as the bombs vibrated across the BUK community. The situation has created panic across the state, even as distressed relatives of the victims and the wounded made frantic efforts trying to determine the conditions of their relatives who were caught up in the attack.

A member of the task force confided that the JTF had not been operating inside the campus, adding that part of the university's autonomy implied that security operatives can only enter their environment, if and only when invited.

He said that being a Sunday, a majority of the soldiers and JTF members were deployed in the predominantly Sabon Gari area, where 95 per cent of the churches in the state were located. He said that the university's community had less security as at the time it came under the attack.

Grief -stricken Chairman of the Christian Association of Nigeria (CAN), Kano State branch, Bishop Ransom Bello, was pained and prayed for the repose of the souls of the dead. Speaking with the Daily Sun, he prayed for the quick recovery of the injured even as he asked God to give the relatives of the deceased the heart to bear the losses.'We are very disappointed that this kind of barbaric and murderous act is visited on innocent students and their lecturers of Bayero University, Kano, who obviously came from different parts of Nigeria to work or to study in the school.

'We totally condemn this kind of senseless and selective attack.

'The mystery of this to us, as a family, is why the attack on our churches? Why we?' This is highly inhuman and retrogressive action', Bishop Bello said. Kwankwaso described the attack as unfortunate, pledged to continue to work hard for the peace of the state. Meanwhile, Governor Rabiu Musa Kwankwaso has described the attack as unfortunate and sad. The governor who cut short a trip to Abuja to visit the scene, lamented that such a painful thing was happening at a time peace was gradually returning to the state capital following sporadic attacks by suspected gunmen.

Governor Kwankwaso assured that the state and federal governments will continue to work hard to ensure that peace and harmony prevailed among the residents.

He stated that the state government has made arrangements with public and private hospitals to ensure that victims of such incidents are treated satisfactorily, while the government will foot the medical bills. The Deputy Vice Chancellor (Academic), Prof. Yahuza Bello, who conducted the governor round, explained that some of the worshippers were attacked in an indoor sports hall at the old campus of the university, which they used temporarily as a place of worship.