MIMIKO HAS NO AGENDA IN ONDO -AJOMALE 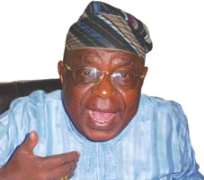 There is no gainsaying that the performance of council Chairmen in Lagos State in the immediate past administration was less than inspiring. Many of them failed to meet the expectations of the general public. In this interview, the Chairman of the state chapter of the ruling Action Congress of Nigeria (ACN), Otunba Henry Ajomole, says a monitoring team has been put in place to track development projects in the various council areas to ensure effective service delivery to the people. He also speaks on the preparedness of his party to wrestle power from the Labour Party (LP) controlled government in Ondo State in the coming governorship poll.

Excerpts…
A new administration has just been put in place in Lagos State at the local government level. What are you doing as a ruling party to ensure a more effective service delivery to the people?

We just held a seminar for all the elected local government chairmen in Lagos State. During the seminar, we were able to let them know the important position they are holding visa-vis the people who voted for them. Again, our cardinal programme, manifestos of the party as well as the constitution of the party were all analysed at the interactive forum. The interactive session was held at Golden Tulip, Festac.

And it was a very interesting programme because we had a practical experience of others who had been there before and did very well. We invited Commissioner for Works and some other organizations that we knew could be of assistance. Some of them who had been in the position before know the inter-linkages between the local administration and the Community Development Associations (CDAs). We even agreed on delivering of dividends of democracy in their respective constituencies. We equally enlightened them on the inter-linkages between the state government's programme and development projects at the council level. We did all this because we don't expect the state government alone to be saddled with the challenge of development.

The local government also must be seen to be complementing the efforts of the state government, especially construction of inter-linkages roads within the council areas. And already, many of these chairmen have started the grading of roads in their various council areas. Beyond that, we have set up a monitoring team, which will monitor their activities. Towards that end, we have employed some young graduates who are going to go after them. So, whatever projects they have, they must inform us so that we can send our monitoring team there to continually track the progress of work going on in the areas. This time, we are not leaving them on their own.

We will ensure that they act according to the manifestos and programme of our party. And I am happy that those who are there now have started very well. Some of them have started constructing health centres in their areas. In fact, I attended the commissioning of one of them some couple of days ago.

Why didn't you do the same for the last administration which many people believe did not perform up to their expectations?

We heard so much from the public concerning the performances of last administration. Even our own members too complained that they did not do enough for the people. But some of them whom our members felt very strongly about, we did not return them. And we have told the new ones that what befell their predecessors can also happen to anyone of them who fails to perform. Our advice to the new ones is that they must ensure that the people participate in their programmes. If they have any project to execute, they must discuss with the people concerned to know their area of priority.

Service delivery is about the people. And that is why we are emphasizing that there must always be Town Hall meetings on regular basis. By so doing, they would be able to carry along the people that are key to development in their respective areas. Although there may be divergent of opinions among concerned stakeholders, the ultimate decision as to what project to implement is in the hand of the chairmen. But you must first and foremost listen to them because your own priority may not be their own priority. These are part of the issues we hammered on in our interactive session with them. This time, there must be a change. If you feel that the Chairman in your local government is not performing, let us know. Whatever project he has done and you feel is not good enough, let us know.

There is a general feeling among the populace that the administration of Governor Babatunde Fashola has slowed down the rate of development since the commencement of his second term. Do you have any disagreement with this?

I don't think so. It depends on the project that is going on. The governor wants to complete Badagry expressway because he doesn't want to hand it over to the incoming administration. If that is the only one he can do, it is better for him to complete it than to hand it over to an incoming administration. And that is why we are telling the federal government too to narrow down its agenda to the ones it can handle. If it is only power they can deliver, they should focus on it. But doing so many projects haphazardly at the same time wouldn't lead the nation anywhere. People must also understand that manna does not fall from heaven. How much is the federal allocation coming to the state?

As at the last census, the population of Lagos State was 18 million. Population of Bayelsa was 3 million. And yet, they are taking four times what Lagos is collecting. Yet, the little we are earning, we are managing it well and we are still the best in Nigeria today in terms of service delivery. Even a minister in the government of PDP has commended Lagos for its development effort. Nigerians in Diaspora have also said the same thing. Yes, you may say I am blowing my trumpet. If I don't, nobody will blow it for me. So, by the time we complete Badagry project, Lagos would be a different thing. If we had more money, why wouldn't we do more?

The governor here is a visionary leader, he wants to do more. But, of course, everything depends on how much we earn. If we have a continuous government with the same orientation, certainly, we will get there. So, we thank God for the foundation laid by Asiwaju Bola Ahmed Tinubu which has been followed by another energetic young man who has distinguished himself. Today, people are saying that they would not be surprised if he becomes the President of Nigeria in future.

How do you see the revelations coming out of the probe of petroleum subsidy fund by the House of Representatives?

The revelations coming out are very shameful. People are dying of hunger and some individuals are pocketing billions of naira. But for me, everything is about management.

We need to put the right people in the right places. Development is not only about money. Today, there is fraud going on here. Tomorrow, there is another one going in there. When are we going to develop for the benefit of the common man? India is becoming an emerging power not by stealing money that is supposed to have been used for development. The common man is suffering in this country. They have destroyed the middle class. It is either you are a rich man or you are a poor man; there is no middle class anymore.

Ondo people are looking for a messiah to liberate them from the shackles of oppression and poverty. And I will not be surprised if people decide to vote against the government of the Labour Party. Of course, government will attempt to rig the election, but we will be there to ensure that justice is done. We have the potential to win the state. So, let us wait and see. We are democrats, we believe in the rule of law. And we will do it in the way it should be done. I know that under a level playing ground, there is no reason why our party will not win Ondo election. The rate of turnover of people crossing over from LP to our party gives us confidence that we will win the election.

Why do you think it is impossible for the ACN and LP to work together in the first instance, especially given the similarities of ideology that exists between the two?

I don't think our ideologies are the same. I don't think it is the same ideology the LP is pursuing. We have a target, we have our goals. I don't have the feeling that the LP party has any agenda at all. We believe in participatory development. If you don't have a programme as a leader, you can't lead anybody. You must have an ideology and a programme of action to be able to liberate people from poverty. In Lagos, Asiwaju has started a revolution that nobody coming behind can change.

With the latest Supreme Court ruling and the coming governorship election in the affected states, are you looking forward to a successful outing?

We are very confident that ACN will win. We are not going to allow what happened in Kogi State election to happen again. We know that we won the election. And now that another opportunity has been given to us, we are not going to allow the same experience to repeat itself. We are the main opposition now in the country. So, we are confident that we have a very good chance in the states.