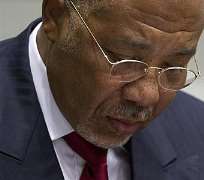 A United Nations-backed court convicted former Liberian president Charles Taylor of aiding and abetting war crimes and crimes against humanity, the first time a head of state has been found guilty by an international tribunal since the Nazi trials at Nuremberg.

Taylor, 64, had been charged with 11 counts of murder, rape, conscripting child soldiers and sexual slavery during intertwined wars in Liberia and Sierra Leone, during which more than 50,000 people were killed.

The first African leader to stand trial for war crimes, Taylor was accused of directing Revolutionary United Front (RUF) rebels in a campaign of terror to plunder Sierra Leone's diamond mines for profit and weapons trading.

"The accused is criminally responsible ... for aiding and abetting in the crimes," Presiding Judge Richard Lussick said as he read out the court's decision.

Taylor was found guilty of providing weapons, food, medical supplies, fuel and equipment to forces in Sierra Leone which committed atrocities, but not of having ordered or planned the crimes.

Wearing a dark blue suit and maroon tie, Taylor looked calm and subdued as the presiding judge took more than two hours to read out the charges, evidence and final ruling.

The litany of gruesome crimes covered rapes and enslavement, beheadings and disembowellings, amputations and other mutilations carried out by child soldiers notorious for being high on drugs and dressed in fright wigs.

And in return for providing arms and ammunition for the conflict, the judge recounted how Taylor had received "blood diamonds" from Sierra Leone, including a 45-carat diamond and two 25-carat diamonds.

"Taylor's conviction sends a powerful message that even those in the highest-level positions can be held to account for grave crimes," Elise Keppler, senior counsel for Human Rights Watch, said in a statement.

"Not since Nuremberg has an international or hybrid war crimes court issued a judgment against a current or former head of state. This is a victory for Sierra Leonean victims, and all those seeking justice when the worst abuses are committed."

Taylor has denied the charges, insisting he tried to bring peace to the region and arguing his trial was a politically motivated conspiracy by Western nations.

But the judge said that "the accused was publicly promoting peace, while privately providing arms to the RUF," adding that "There was a constant flow ... of diamonds from Sierra Leone to the accused, often in exchange for arms and ammunition."

At the start of the hearing, Taylor seemed relaxed, waving at some people sitting in the public gallery, and separated from the windowless trial chamber by a thick pain of glass.

Later, as the presiding judge's reading of the judgment appeared to swing against Taylor, the former president clasped his hands more tensely in front of him.