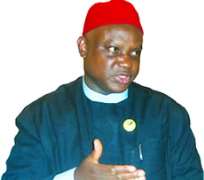 The Independent National Electoral Commission (INEC) has rejected the application brought by Chief Chekwas Okorie, which is seeking to register the United Peoples Grand Alliance (UPGA) as a political party.

The commission, in a letter dated April 23 addressed to Okorie with reference No. INEC/DPPM&L/UPGA/428/143 and signed by the Secretary of the commission, Abudalahi Kaugama, listed three reasons why it would not register the association as a political party.

The letter, which was signed for and collected by Ogbote Charity, the secretary of the UPGA read: 'Please refer to your application for registration as a political party. You may recall that you proposed and accepted the verification of the proposed headquarters of your association on April 17, 2012 as part of the processing of your application.

Kaugama stated that, 'having concluded the legal and other reviews of the documents you submitted, the commission has established the following notations;

•The explanation of your logo in Article 3 of your proposed Constitution as 'Early Morning Sun' has ethnic connotation due to its similarity to the logo of the defunct Biafra and the Movement for the Actualisation of the Sovereign State of Biafra (MASSOB) thus suggesting the association is restricted to the eastern part of Nigeria contrary to Section 222(e) of the Constitution of the Federal Republic of Nigeria 1999 as amended.