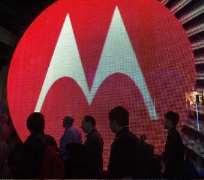 The maker of equipment such as two-way radios used by the police and handheld computing devices used in retail stores expects second-quarter revenue to grow about 6 percent, implying revenue of $2.10 billion.

It expects an adjusted profit of 65 cents to 70 cents per share from continuing operations, compared with analysts' expectations of 68 cents per share, according to Thomson Reuters I/B/E/S.

Net income for the first quarter, however, fell more than two-thirds to $157 million, or 49 cents per share.

Analysts expected an adjusted profit of 54 cents per share, on revenue of $1.93 billion.

The company's shares, which closed at $48.66 on Tuesday on the New York Stock Exchange, have risen 22 percent since the split.