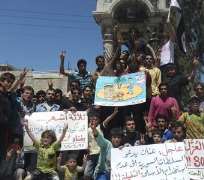 A Syrian intelligence officer was killed in Damascus on Tuesday, opposition sources said, and pro-government television reported at least three people wounded in a car bomb blast in the capital, the latest upsets to a shaky U.N.-monitored truce.

The fledgling U.N. observer mission visited the central province of Homs, hotbed of a 13-month-old uprising against President Bashar al-Assad, as part of efforts to solidify the 12-day-old ceasefire.

The UK-based Syrian Observatory for Human Rights said an intelligence officer was killed early on Tuesday in the Barzeh neighborhood of Damascus, but it gave no further details.

Ikhbaria blamed the bomb on "armed terrorists", a reference to rebels inspired by Arab Spring uprisings against repressive autocratic rulers in North Africa and the Middle East who have been fighting to overthrow Assad.

The United Nations says security forces have killed at least 9,000 people, while Damascus says 2,600 of its personnel have died at the hands of insurgents that have seized control of pockets of towns and cities across the country of 23 million and continue to launch daily guerrilla attacks.

The state-run news agency SANA said on Tuesday customs officials on the Syria-Lebanon border had seized a car stuffed with ammunition and weapons, including three machineguns and a rocket-propelled grenade launcher.

CEASEFIRE "INCOMPLETE"
A small group of unarmed U.N. military observers has been in Syria for just over a week to track an April 12 truce engineered by former U.N. Secretary General Kofi Annan.

Under the terms of the deal, both sides are meant to observe a ceasefire while the military withdraws tanks and heavy weapons from population centers - requirements that the United Nations made clear on Monday were not being heeded.

"The cessation of armed violence remains incomplete," Lynn Pascoe, U.N. undersecretary-general for political affairs, told the Security Council during a debate on the Middle East.

The observer mission is supposed to grow to 300 unarmed personnel, although the minimal presence already on the ground has led to a decline in the daily death toll, activists say.

However, they accuse Assad's army of simply parking tanks out of sight on farms on the outskirts of towns and cities and resuming operations the moment monitors' backs are turned.

Activists said 31 people were killed on Monday in shelling and shooting in the central city of Hama, a hub of the anti-Assad revolt, the day after a brief visit by a U.N. team.

"It began in the morning with tanks and artillery. There were houses burning," a local opposition activist called Mousab told Reuters in neighboring Lebanon.

Another 24 were killed in violence elsewhere on Monday, according to activists said.

The Homs region has been battered by major violence during the past year and there is little outside belief that the monitoring mission - even when it reaches full size - will bring an end to the conflict.

"I do not expect it to succeed, because the number of observers is very small. Three hundred people cannot do anything," Tunisian President Moncef al-Marzouki said in an interview published in the al-Hayat regional newspaper.

"In Kosovo there were thousands of observers," he said, referring to the former Serbian province that is a tiny fraction of Syria's size.

Marzouki, who came to power in the aftermath of Tunisia's relatively peaceful pro-democracy uprising a year ago, called on Assad to step down to avoid further loss of life - including his own.

Assad "will go one way or another ... dead or alive," he told al-Hayat.

"The Russians and Chinese and the Iranians must understand that this man is finished and they cannot defend him. They must persuade him to leave power and hand over to his deputy."

Moscow has been critical of other bids to end the violence by groups like the 14-nation "Friends of Syria," saying it could undermine Annan's plan. Russian U.N. envoy Vitaly Churkin also described placing sanctions on Syria as counterproductive.

The conflict has crippled Syria's oil- and tourism-driven economy and U.N. officials say it has forced tens of thousands to flee to neighboring Turkey, Jordan and Lebanon.

U.N. aid agencies, like foreign journalists, have been largely barred from Syria but a joint assessment mission carried out last month with Syrian authorities estimated that at least one million people inside the country needed humanitarian aid.

The U.N. World Food Programme (WFP) said on Tuesday it aimed to deliver aid to 500,000 people "in the coming weeks", roughly double the number it expects to reach this month.