WHAT BECOMES OF IGBO'S INVESTMENTS AFTER NIGERIA'S BREAKUP 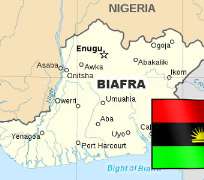 It is not unexpected that people have grown to have all sorts of emotional attachment to the Nigerian state. For some these are real and genuine feelings of patriotism but for many others they have nothing but pure hatred for a country that has so mistreated and brutally murdered them in several genocidal orgies. To such ones Nigeria is not only a disappointment but a nightmare. Each of these groups has their reasons for feeling the way they do. So, whenever Nigeria’s inevitable disintegration comes up for discussion people’s reactions are always mixed depending on the side they are leaning. But with the passage of time and because of several obvious reasons and events, gradually most people are beginning to accept the fact that Nigeria as one unit is impossible and can never work. When Nigeria divides there is bound to be some consequences. Some of those consequences cannot be predicted ahead of time but many, such as what happens to Igbo/Biafra people’s investments outside their Homeland is one that can be predicted. Here we will attempt to address that concern.

These apprehensions of most people as regards to what happens to Igbo/Biafrans’ investments in places outside their Homeland but within Nigeria after Nigeria has broken up into the various nation states are quite real. The previous Biafra War and its Abandoned Property issue in especially Igwocha (Port Harcourt) inform much of this fear. It is on the overall a legitimate concern and cannot be ignored; especially when we look at it from the view point of Carl Marx’s theory of economic determinism. Igbo opinion and political leaders must find a way to put the people’s mind at rest on this. Material possessions are actually an important aspect of a people’s being and we must take what happens to Igbo/Biafran’s properties after Nigeria’s break up very seriously. It is no doubt that Igbo’s properties are scattered throughout the landscape of the present Nigeria. In some cases you find that the value of Igbo’s investments comes right after those of the indigenous people in many Nigerian cities. In a number of cases such as in Abuja the value of Igbo’s properties is said to be more than those of other people. Some conservative estimates have put Igbo/Biafrans’ properties outside the Homeland values at several hundreds of billions of dollars. Nobody should pretend that such size of wealth should be ignored or abandoned at the toss of a coin.

Be that as important as it is, but we shall try to address the question with the Igbo truism of nduka aku (life [freedom, honor,] as being superior to material wealth). Just few years ago some northern Nigeria politicians went to Eze Ozobu and told him that the Igbo should support the North for the presidency instead of the Southsouth candidate. Ozobu asked them why and they said that the Southsouth people seized Igbo’s properties after the Biafra War by declaring them abandoned by the owners. But Ozobu answered and said; yes our Southsouth brothers seized our properties but left us alive to start again. On the contrary, Ozobu said, you our northern neighbors killed us and disemboweled our pregnant women and even killed the unborn Igbo/Biafran babies in the stomach. Today, after 42 years and, looking at how the survived Igbo/Biafrans have fared it is not difficult to know who between the two has treated the Igbo better. Most importantly, what the story tells us is that no matter how big is Igbo’s properties and wealth outside the Homeland it must never becloud them from thinking of and working for a permanent solution, in separation, to the incessant Islamic killings and lootings of Igbo, Biafra people. Putting it differently; when Igbo’s life is not destroyed while their material possessions are taken away they will still replace those by many folds if they can have a homeland from where they can launch out and start again.

The need for a sovereign nation that defends the rights and dignity of the Igbo cannot be over emphasized. This is true when one considers the fact that in Igbo cosmology njepu or belief in world citizenship is a cardinal aspect of Igbo existence. The Igbo therefore must work hard at creating a buffer zone, home base, tactical defense headquarters, anything, from where they can call for support and reinforcement. Presently Nigeria is not doing that and will never one day serve that purpose for the Igbo. Yes, the dispossession of a people’s material wealth is nothing to compare with the dispossession of their soul which is what one-Nigeria is doing to Igbo/Biafrans today. Rather than lose the Igbo, Biafra soul is it not better that they lose their properties in Lagos, Abuja and several other cities in Nigeria? Let Igbo have their lives and be well mobilized by the unique Igbo/Biafra democratic, political and intellectual leadership and they will have everything back in a few years.

That may not sound convincing enough for some people so we will like to remind us of the role of the international community in a matter like this. When Nigeria breaks up there will be interventions from other nations and there will be provisions for asset management. Let me illustrate with a very recent incident. My friend Ebrima Sonko who heads the Oxfam operations in Senegal, Mali, the Gambia and Guinea told me last week how the coupists in Mali looted Oxfam offices and took two of their vehicles. They made away with these things but returned them after a few days because a few phone calls were made and the European High Commission exerted pressures. Therefore, even in the midst of chaos, for those who know how to handle their businesses, the right strings can still be pulled for the right effects. It should also be remembered that other Nigerians equally have properties and investments within Igbo/Biafra Homeland. No matter the size, no one wants to lose what he has toiled to acquire. We should also bear in mind that international boundaries do not prevent a foreign citizen from owning properties in places other than their native homeland. Presently, Igbo/Biafrans own properties and investments in several other countries other than Nigeria and that does not make them to want to annex those countries into even a bigger one-Nigeria.

Therefore, Igbo leaders of thought must try hard to make their people understand that it does not matter if Nigeria disintegrates through peaceful or violent means, eventually the dust will settle and there will be repositioning and life will go on but never again with Igbo or Biafra as part of the one-Nigeria. Let the people know that the Igbo do not need to be citizens of the same country with the other Nigerians in order to do businesses in Abuja, Lagos or any other place for that matter. The whole thing still sounds difficult? Oh yes, what is Igbo’s brain meant for; to handle difficult situations; to find solutions to the seemingly impossible puzzles of the endangered Igbo situations in the Nigerian state. Igbo intellectuals and leaders must crack the code that holds the secret of how to take Igbo out of the one-Nigeria. Igbo brain must find the courage to pursue radical conclusions without shirking from the hard work that must be done to attain the ideal.

Having lost to the one-Nigerian concept since its inception, 5 million of the choicest of their people, Nigeria’s breakup is something the Igbo/Biafrans will have no regrets about. For the Igbo it will be good riddance of a really, really bad dream. It’s not just the human lives and physical materials that they lost but equally as bad are the lost opportunities and stunted growth and development; those things that would have been. It’s the generations after generations that never attempted or accomplished any big thing all because they had to wait for their neighbors who are unwilling to come along.

In closing let’s go back to where we started from. In addition to all we have said we wish to say that the wealth of this world is limitless so long as any people can still find a way to think creatively and work hard at achieving the dreams of their thought. How long has it taken the Igbo/Biafrans to acquire the wealth in those places which some would want to choose above life, prestige and freedom? Let's say, give or take half a century. But the Igbo leadership of today should be thinking of and actually building a Homeland that will last for hundreds of years. Let all Igbo or Biafrans everywhere think more along this line. It is not a boast, but let Igbo and all Biafrans separate from Nigeria today, let them start all over and given the right mobilization, it will just be a matter of a few years and they would once again be on their way and this time on a better footing. Some people may have harbored the question and itching to ask if war will be needed to divide Nigeria. Here we will answer the question with one of the favorite official lines of Biafra Government in Exile, BGIE; “we neither make war nor peace with the Enemy”.

Having said that, we would like to add one fact that is borne out of the antecedents of history; no one relinquishes power without a fight, and Nigeria’s case may not be different. But which is more important, this slavery and indignity of unending genocides of one-Nigeria or freedom in a separate progressive, secure and prosperous independent sovereign nation? However, without minding how Biafrans get their freedom, it must be emphasized that the new nation must of necessity undergo a revolution following her national sovereign independence. It cannot be business as usual after separation. If Biafra’s eventual freedom comes peacefully (of course it cannot be considered as such as no one has forgotten the 3.1 Igbo/Biafrans killed by Nigeria between 1966 and 1970) then it must be followed with a revolution of the kind that can only be equated to war.