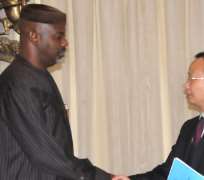 CALABAR, April 15, (THEWILL) – The Cross River State Government and the Chinese Civil Engineering and Construction Company (CCECC) have signed a contract for the construction of a four-kilometer dual carriage road valued at N6.9 billion to link the proposed Calabar international Convention Centre.

Speaking after the ceremony, Governor Liyel Imoke urged the contractor to be committed to the road project and see that it is delivered on schedule with no increase in cost but of highest standard.

According to Imoke, the dual carriage road will commence from Murtala Mohammed Highway to the centre as well as create access to Tinapa Business and Leisure Resort and open up the adjoining area, thereby cutting the 16-kilometer distance to Tinapa by 12 kilometer and taking it nearer to the city.

The governor remarked that that road will be of economic value as it will be installed with street lights to link the most unique convention centre in the country as well as boost activities at Tinapa which is in line with government’s determination of creating alternative economy especially in tourism and the hospitality, where conferences, workshops seminars, and retreats of international standard will be held in Calabar.

According to him, this will act as a key sector of the economy, which the administration has identified to create great opportunities in terms of job creation. He appealed to the contractor to execute the project on schedule.

He disclosed that there are other projects in the pipe along the road, which will complement the convention centre whose civil work will commence by the end of May.

The Governor disclosed that projects earmark within the area include a new golf course, housing estate, new carnival city and a specialist hospital as the road will ignite the growth of Calabar and its economies.

Mr. Lee Wang commended the State Government for awarding the company the contract after a competitive bidding and promised to execute a worthy job and to specification.

Wang lauded the state for its vision and partnership to deliver good quality service to Cross Riverians.

Earlier, the Special Adviser Governor’s Office, Mr. Nzan Ogbe disclosed that CCECC won the contract because its bidding was reasonable and that it has the technical expertise and competence to execute the job, adding that the road construction will last for 24 months.