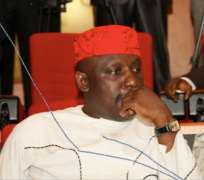 When Governor Rochas Okorocha came to power in Imo State last year, Imo people heaved a sigh of relief. Everybody including school children jumped for joy that finally, a ‘messiah’ has arrived. That life in the state will change for good. But some of us cautioned because Imo State has not been lucky in ‘choosing’ who governs them. This line of argument is based on the verifiable fact that the State has never had a good leader with the exception of Chief Sam Mbakwe of the blessed memory.

Almost one year in office, all we hear is ‘Rochas is doing well’ in Imo State. The truth is there is little or nothing to show for his ‘doing well’. Development Proposals and the renaming of Assets are not signs of ‘doing well’. Anybody can make Proposals or re-name State assets given the opportunity. I am not discounting some patchy efforts that litter the state. The truth is that Imo has not been touched by the present government if you equate the development on ground with the euphoria that greeted the governor’s victory last year.

Like his predecessor, Chief Okorocha knows how to work the media to achieve maximum effect. He has made some pronouncements in the right places including motor parks and got boundless publicity. But the reality is that his administration has not done much in the last one year. And looking back, one could say that Governor Okorocha’s handlers over-reached themselves in the minds of Imo people.

Now the undoing of chief Okorocha’s government is here. It is the 4th Tier Government he is rushing to put in place in our villages. Rather than conduct Local Government Elections as stipulated by the Constitution and once more test his popularity, the governor has abandoned his duty post and gone to the villages to tap palm-wine and play draughts with political sycophants. Governor Okorocha’s 4th Tier is a flat tyre. Firstly, the space is already occupied. The Media is the 4th Tier in a democratic society and the idea is not well thought out. It is like his predecessor’s Autonomous Community bazaar which has only succeeded in creating disaffection and made Imo Communities litigious.

However, Imo people are daily becoming aware of the reality and the danger in dissipating the State Towns Unions in the name of illusory 4th Tier government

Igbo, particularly Imo people love innovative ideas, but any innovation that creeps into their family or village life is bound to fail. Owelle Rochas’s 4th Tier government is a political gimmick. He knows the idea will not fly. He pulled a fast one and today people are talking about an issue that is unworkable or dead on arrival instead of how to move the state forward. The 4th Tier Government is bogus, diversionary and imperils Imo village life.

The important roles Town Unions play in Imo state in particular and Igbo land in general cannot be over-emphasised. Their functions are many and varied depending on their locality. But the dissolution of the Unions by the governor by mere pronouncement as if they were his creation erroneously suggests that the villagers are rubbish and one measure fits all for the Unions. Town Unions know their members by their first names and serve as bulwarks for their members’ families anytime any day. And for those who do not know, Town Unions, Religion, Rangers International FC just to mention but a few were the ‘machines’ that kept Ndigbo trudging at the end of Biafra/Nigeria civil war.

Truly some of these ‘machines’ have diminished since the end of the civil war but the Town Unions have remained resilient, resolute, local but global in their outlook. It is also important to mention here that Sam Mbakwe International Cargo Airport in Owerri was built thanks to the organisational acumen of the Town Unions of Old Imo State. Imo People were able then to build their own Airport because the Town Unions were non partisan and deep rooted in their various village activities. Above all, the Unions were run by unremunerated but highly committed apolitical people. The Town Unions mobilised and encouraged Imo sons and daughters to pay the Airport levy to their respective branch where they reside. The levies were then remitted to Central Town Unions in the villages from where they were paid into the Imo Airport Committee Bank Accounts. The Town Unions knew those who did not pay the Airport levy.

Town Unions also function like insurance especially for poor Igbo who live in cities in Nigeria where people have little or no confidence in insurance companies. In Town Unions, people pull their resources together and get some kind of benefit in good and bad times. In case of death, Town Unions help in ferrying the body of their dead member’s home, participate actively in their Members Events like Christening (naming), Marriage and other Ceremonies which Governor Rochas Okorocha 4th Tier Government cannot do.

It is also important to point out here that the Town Unions Governor Okorocha claimed he has dissolved have branches outside Imo State and in other States in Nigeria. Some even have branches in the US, Europe and Asia where the governor cannot reach nor have the power to dissolve. To maintain their political neutrality, the branches could decide not to have anything whatsoever to do with Governor Rochas Okorocha’s elected leaders in their respective villages. The consequence if they choose this line of action is as good as mine.

Now, why is it that, unlike in other parts of Igbo land, Imo State people give in to excessive control by individuals and organisations in various layers of Authority. For example, if your loved one dies in the State today, the churches bulldoze themselves in to tell you when and how to bury him or her. Government of all shades bully the citizens too. And if Governor Okorocha succeeds in destroying the Town Unions, he will move on to take control of the Imo WOMEN’s YEARLY AUGUST meeting, our bedrooms and finally the number of children each and every one of us is allowed to have in our respective villages. I hope the governor has dissolved also Association of Imo Town Unions in Lagos.

As Governor Okorocha has wagged the tails of the Town Unions they should not let him run away with his own tail between his legs. They should come together now as a matter of urgency and form a Union in their respective Local Government to look into how the Statutory Allocations to their Councils are spent as Federal Allocations are basically Town Union Funds and not fund the governor can dip his hands into willy-nilly.

Sam Asoluka is the Publisher of THE AMBASSADOR MAGAZINE in London. You can reach him on the